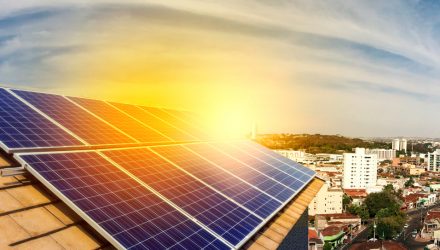 Solar-related exchange traded fund was shining on Thursday after a wild swing in Enphase Energy (NasdaqGS: ENPH) helped prop up the sector.

The Invesco Solar ETF (NYSEArca: TAN) was among the best performing non-leveraged ETFs of Thursday, rising 2.5%.

Enphase shares climbed after Wall Street analysts provided positive comments on the company outlook, following a negative report from a short seller in the prior session, TheStreet reports.

ENPH shares plunged Wednesday after Prescience Point Capital Management, which has a short position against the company, claimed in a report that Enphase’s 10,700% rally since its 2017 low was based on spurious financials, according to Business Insider.

The short-seller said it believes “that at least 39%, or $205.3 million, of Enphase’s reported US revenue is fabricated.”

“Based on our research, we estimate that at least $205.3m of its reported US revenue in FY 2019 was fabricated. Based on statements provided by former employees and other solar industry participants, it appears that the Company inflated its international revenue significantly as well,” according to Prescience Point.

However, Enphase Energy rebounded Thursday on bullish commentaries from J.P. Morgan analyst Mark Strouse, who has an overweight rating on the stock. The analyst argued that Enphase Energy “seemed dismissive” of the concerns.

A number of analysts also showed skepticism with the Prescience Point report. For instance, Cowen analyst Jeffrey Osborne also has held an outperform rating on Enphase Energy, noting that the stock’s 26% plunge Wednesday on the negative report opened a buying opportunity.

Enphase’s product cycle is “working to drive down cost,” Osborne said, adding that the Prescience Point report has a “number of inaccuracies.”

Roth analyst Philip Shen held a buy rating on Enphase and argued that the recent negative report was “specious” as he highlighted the company’s cash generation and sees no indication that it overstated revenue and profit margins.