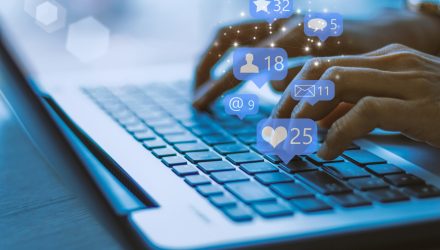 On Thursday, Canaccord Genuity released a note with some downbeat commentary on Facebook, Twitter Inc. (NYSE: TWTR) and Snap Inc. (NYSE: SNAP). Twitter and Facebook are SOCL’s second- and third-largest holdings, respectively, combining for 20% of the fund’s weight.

“For instance, the analysts in coverage lowered their price target on FB shares to $180 from $185, saying the security could remain range-bound for part of 2019,” reports Schaeffer’s Investment Research. “However, they kept their ‘buy’ endorsement in place on the FAANG stock because they believe recent changes will be good for users and monetization, and that operating margins should bottom this year, which will lead to earnings growth in the coming years.”

“Canaccord Genuity lowered its price target on Twitter shares to $32 from $34 and maintained its ‘hold’ rating. It waxed pessimistic on monthly and daily average user growth, and cited a ‘premium valuation’ that could make it difficult for the stock to rise,” according to Schaeffer’s.