You are at:Home»ETF Strategist Channel»Smooth Sailing Into 2018 Despite Changes In Market Leadership 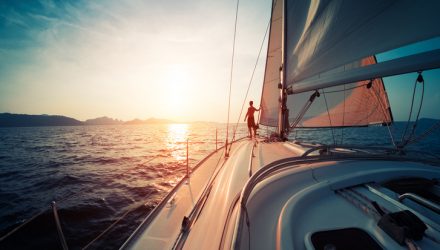 Smooth Sailing Into 2018 Despite Changes In Market Leadership

We expect global equity markets to grind higher during 2018, while interest rates and commodity prices will likely remain range bound. At this time, we are emphasizing areas of the markets that lagged in 2017, such as U.S. small- and midcaps, as well as value. Global economic growth appears stronger than many expected, and we think that trend will continue. Therefore, we anticipate some of those areas that have lagged may soon lead the markets. We expect this continued growth in the global economy to endure for three important reasons.

First, central banks continue to employ stimulative policies that should allow economic growth to remain in place. While the U.S. Federal Reserve (Fed) is expected to raise interest rates further and slowly reduce the size of its balance sheet, both the European Central Bank and the Bank of Japan continue to supply the global economy with additional stimulus through low interest rates and balance sheet expansion (exhibits 1 & 2). 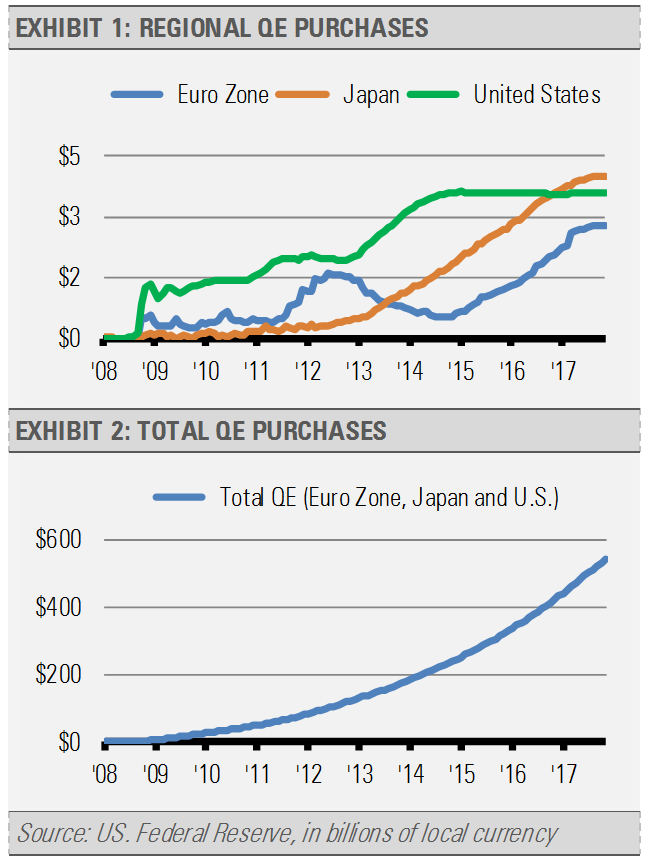 Secondly, we think the U.S. economy is strong and can support corporate earnings growth and higher stock market prices. Borrowing costs and inflation remain low, while labor markets continue to improve. Therefore, household spending should continue to drive economic expansion (exhibit 3). In addition to consumer spending, we expect business investment to continue its advancement (exhibit 4). Recently enacted tax reform will likely have a positive, though marginal, near-term impact on the economy. As a result, we think U. S. real GDP growth for the remainder of 2017 and 2018 is likely to be around 2.0% – 2.5% annualized. This should be enough growth to allow for continued earnings improvement, but hardly enough growth to spur significant inflationary pressure (exhibit 5). 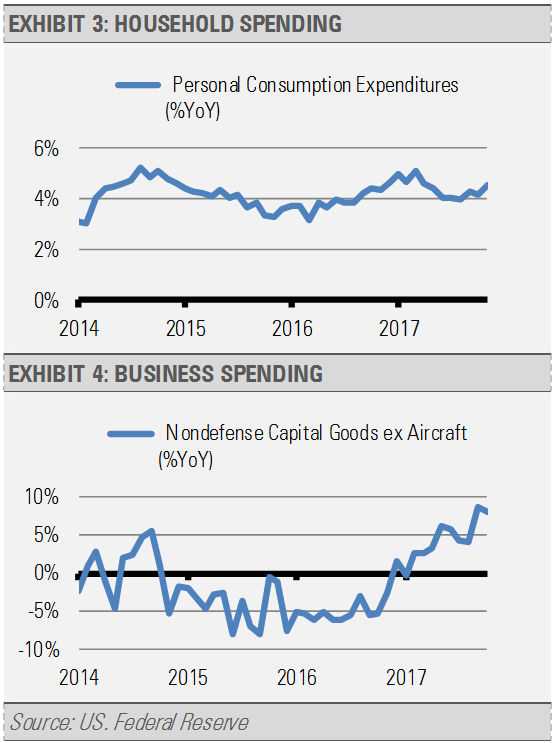 Finally, the global leading economic indicators that we track suggest continued economic momentum as we enter 2018. For example, the latest reading of the JPMorgan Global Manufacturing PMI, based on November data, indicates an increase in the rate of global manufacturing production, which rose to levels not seen since February 2011 (exhibit 6). Improvements in global growth have been led by the euro zone where output expanded at the fastest pace in more than six years with increases in activity across the continent’s major economies including Germany, France, Italy, and Spain. Positive trends in new orders is straining capacity and has increased the backlogs globally. This trend has encouraged jobs creation around the world. 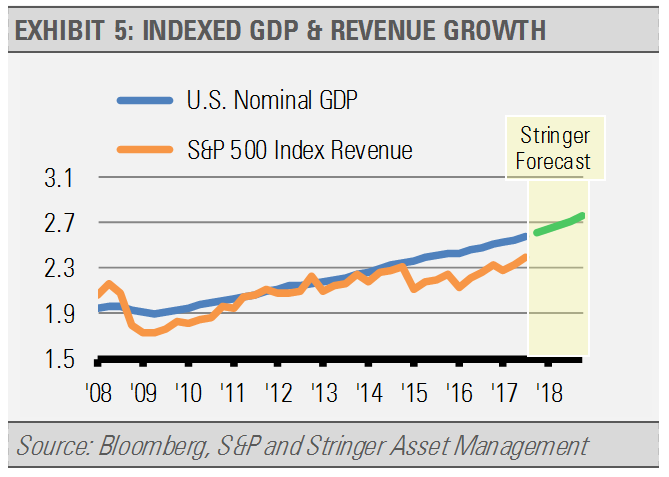 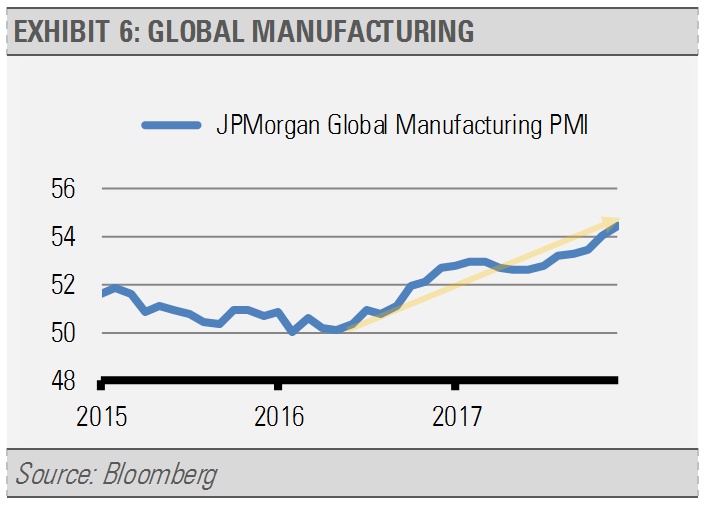 This advancement in the global economy should create a favorable atmosphere for equity investors. While we remain constructive on near-term economic fundamentals, stock market volatility can increase at any time. Credit spreads, the difference between corporate bond yields and Treasury yields, tend to lead equity market volatility, but currently project market stability for the months ahead (exhibit 7). Tight credit spreads continue to suggest that any stock market selloff will likely be contained. We think that profits can be made in these markets, but it may not be glamorous, more likely it will be a grind. 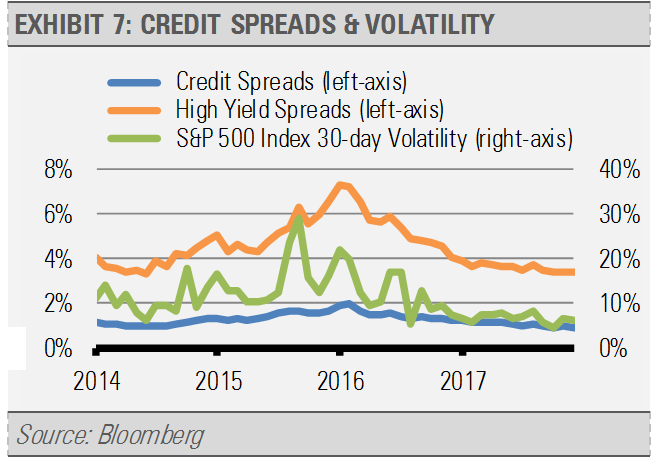 The environment will get more interesting later in the year after the Fed hikes rates further. Unless monetary conditions and the yield curve become more accommodative to rate hikes and a balance sheet reduction, the Fed might be in danger of overtightening policy and choking off liquidity. For example, historically the yield curve, which is the comparison of rates at various maturities, has been a good leading indicator of U.S. economic activity (exhibit 8). When long-term rates are significantly higher than short-term interest rates, which results in a positive slope to the curve, future economic growth has generally been solid. However, a flat or inverted yield curve, where long-term interest rates are lower than short-term interest rates, has been a leading indicator of economic difficulty and recession. 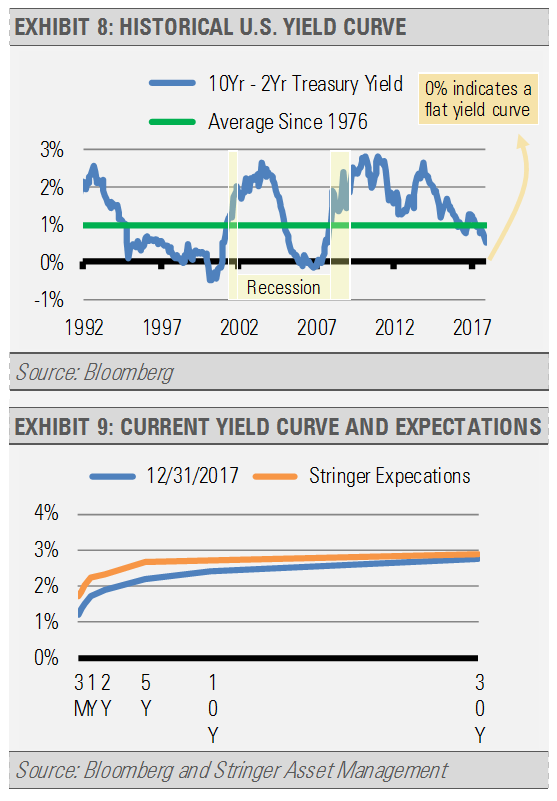 Our base case is that the Fed will not make such a serious error, but as we manage risk in real-time, we will make tactical changes quickly should the need arise.

Within our equity allocations, we are favoring the health care, industrials and materials sectors. We think that industrial and materials stocks can benefit from the improving global economic growth trends highlighted above. Additionally, we recently purchased an investment focused on dividend-paying technology stocks. Despite consistent upside earnings surprises from these large and stable information technology companies, these stocks have underperformed the broader technology sector, which we think will reverse in the near-term. These companies may also benefit from tax reform, especially as it pertains to repatriating foreign earnings. Finally, we maintain our general value bias despite it lagging growth recently. We think the recent outperformance of domestic growth stocks relative to value has mostly run its course.

In general, U.S. equities seem a little expensive to us, though we are interested in the sectors previously mentioned. We are finding interesting opportunities in Europe and Japan, where valuations remain attractive and economic fundamentals are improving. We are not long-term bulls on either region, but find them favorable for the time being.

While domestic equities and emerging market stocks are trading at a premium to their historical average valuations, both Europe and Japan are trading at discounts (exhibit 10). Emerging markets have surged recently, and we think their return expectations over the near-term should be lowered, especially since several central banks in emerging Europe and emerging Asia are looking to tighten monetary policy. As a result, emerging market stocks is one of our larger underweights.