You are at:Home»Smart Beta Channel»U.S. Dollar is Still The Currency to Play in this Cautious Market 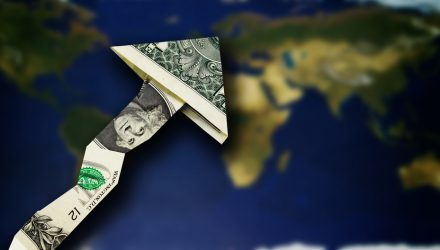 U.S. Dollar is Still The Currency to Play in this Cautious Market

The U.S. dollar took a back seat during Monday’s trading session as gold prices rose on the major stock market indexes heading downward, but relative to other currencies around the world, the greenback is still holding its own.

“The greenback soared against emerging-market currencies as investors made another stampede into haven assets on fears that the coronavirus will send economies into freefall,” an MSN report noted. “Losses in Asia were led by the Indonesia rupiah and Korean won, which are particularly sensitive to global growth. Both slid about 3% as the number of countries shuttering borders and imposing self-isolations soars. Thailand’s baht and the Malaysian ringgit dropped around 1% after S&P warned the epidemic could cost the Asia-Pacific region $620 billion in economic losses.”

It just shows during a black swan event, the good old U.S. dollar proves to be a safe bet while the markets around the world are getting roiled by the coronavirus outbreak.

“In an almost synchronized run for safety most assets are being sold for the dollar,” said Eugenia Victorino, head of Asia strategy at SEB AB in Singapore. “Korea is clearly in the frontline, but Indonesian and Indian assets are also taking the brunt.”

As the world scrambles for the safety of the U.S. dollar, the Federal Reserve responded in two in order to bring more liquidity to the market. Even with the central bank cutting rates to zero, the dollar is still climbing.

“The dollar is rallying on haven demand — markets are digesting the implication of job losses, a prolonged economic downturn,” said Christopher Wong, a senior foreign-exchange strategist at Malayan Banking Bhd.