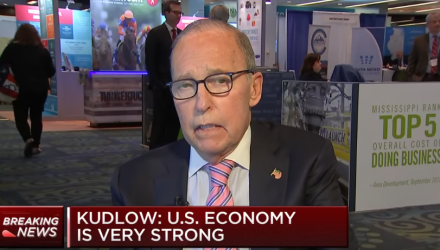 Who needs a trade deal when the U.S. economy can maintain its current growth rate? It’s a question that investors weren’t asking in May when the volatility stricken month sent the capital markets in a daze, but Larry Kudlow, director of the National Economic Council, thinks this is no longer the case.

Thus far in 2019, VTV is up 7.12 percent. Its rise comes after a shaky end to 2018 as investors are picking themselves up in 2019, but rather than deep-diving into the capital markets headfirst, they’re picking their spots and deploying capital more strategically.

However, one of the challenging aspects advisors face with this more cautious investor is the plethora of options available, especially in the ETF space. Where are the opportunities in ETFs given the current market landscape challenged by obstacles such as trade war fears?

A market-capitalization-weighted index provides clients with exposure to a particular market based on security prices, without considering any true company fundamental to judge its value. However, the Great Recession of 2008 roiled investors with deep declines that they were not anticipating, as a result of overexposure to potentially overpriced stocks relative to their true value.

Given certain market conditions, investors need more than just a passive index that goes beyond a one-size-fits-all template that uses market cap weighting. While these indexes provided simple, low-cost solutions, the need for even greater scrutiny is necessary in the quest for more alpha —a case for smart beta.

Through smart beta, investors get adaptable exposure with the rules-based approach in conjunction with reaping the rewards of diversification via access to a broad market index. In addition, the simplicity of buying a broad-based market index has a concentration of risk, and should a market correction ensue comparable to that witnessed in the fourth quarter, investors are left vulnerable.

As such, smart beta strategies can be segmented into alternatively weighted, single factor and multi factor strategies–the latter to diversify concentration in a specific factor–low or minimum volatility, momentum, size, quality, yield, and value.