The saying, “past performance is no guarantee of future results,” is evident according to index provider and data analytics firm Standard & Poor’s and their Persistence Scorecard. According to the scorecard, it’s difficult for active fund managers to outperform their peers on a consistent basis.

The metric goes against the notion that active successful fund managers can duplicate their performance. Furthermore, this was seen throughout the capital markets, irrespective of asset class.

According to S&P, the Persistence Scorecard “attempts to distinguish a manager’s luck from skill. One key measure of successful active management lies in the ability of a manager to outperform his peers consistently.” However, in a one year period ending Sept. 19, volatility did no favors in upping their persistence scores.

“The market experienced ups and downs in the past year amid the uncertainty over Fed policy and trade tensions between the U.S. and China,” wrote Berlinda Liu in a S&P article. “The sell-off in the fourth quarter of 2018 was offset by the strong rally in the first six months of 2019, the best-performing first half of a year since 1997. For funds categorized as top performers in September 2017, 47% maintained their top-quartile performance in the subsequent year.”

“However, there was a dramatic fall in persistence afterward—just 8% of domestic equity funds remained in the top quartile in the three-year period ending September 2019,” Liu wrote. “Given that the random odds of a top-quartile manager in year one staying in the top quartile in the subsequent two years is 25% * 25% = 6.25%, it appears that top managers in the rising market prior to Q4 2018 navigated the subsequent market turmoil only marginally better than a random drawing.” 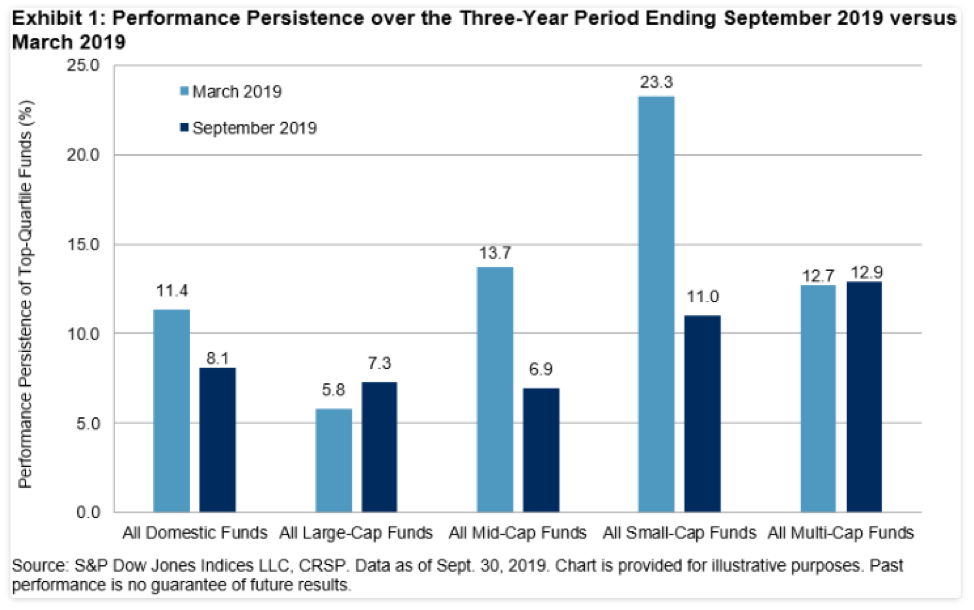 Transparency has been one of the differing factors when it comes to differentiating mutual funds and ETFs, but a new crop of actively managed ETFs could open the floodgates for active management.

In May, the Securities and Exchange Commission (SEC) approved an ETF structure, developed by Precidian Investments LLC, that would allow actively managed ETFs to operate the same way as mutual funds–by bypassing the daily fund disclosure requirement where investors can see the ETF holdings. Per a Pensions and Investments article, the approval “was followed this month by regulatory notices of four additional structures for actively managed ETFs seeking relief from certain stipulations in the Investment Company Act of 1940.”

The funds, however, would still have the flexibility of an ETF when it comes to using them as a short-term trading tool.

“While a separately managed account may be cheaper on an expense-ratio basis than an ETF, setting up or winding down an SMA is still a process for the end investor,” said Edward Rosenberg, senior vice president and head of exchange-traded funds at American Century Investments. “Whether for transition management or a long-term investment, an ETF, transparency aside, offers investors more control over their entry and exit points.”