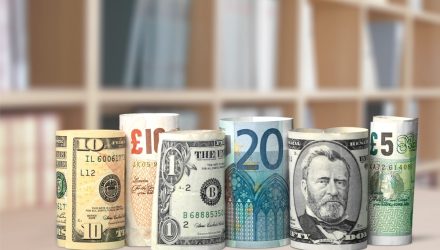 Jason, the currency markets aren’t immune from this recent sell-off, is there a framework that can help investors navigate these choppy waters as they think about the impact of currency on their international investments?

When investors are thinking about whether or not to currency hedge their international investments, they should use a consistent and objective framework. DWS’ currency hedging framework relies on four important inputs to consider when deciding whether currency hedging is appropriate:

Our forecasts call for limited upside or downside for the US Dollar. The dollar should be supported by attractive relative interest rates even after significant cuts by the Fed. It’s important to note that many global central banks followed suit and have also engaged in very accommodative policy following the Fed’s rate cuts and announcement of additional asset purchases. The US Dollar has already traditionally acted as a safe haven currency, strengthening when there is turmoil in equity markets.

In spite of a significant rally in rates across the US Treasury curve, US rates are still among the most attractive in the global developed markets. Monetary policy in Europe and Japan continues to be historically accommodative and other central banks such as Australia and Canada have engaged in further rate cuts in tandem with the Fed.

• Volatility of the currency has increased

While we’ve found that correlations between currency and equity matter more in terms of the relative volatility of hedged versus unhedged international equities, the volatilities of the 2 risks also matter. When investing on an unhedged basis, investors assume both the equity and currency risk. As currency volatility has picked up dramatically from February lows, the risk of keeping this currency risk, all else equal, has obviously increased.

So, which currencies have been hit particularly hard, and which matter in terms of their size exposure in developed and emerging markets?

Thus far this year, there’s been quite a bit of weakness in a number of the major international developed currencies. Of the EAFE currencies, which is a pretty good proxy for international developed markets (Europe, Australasia, and Far East), the Euro (~30%), British Pound (~15%), and the Australian Dollar (~7%) are down -3%, -7%, and -14%, respectively, on a spot return basis. Only the Japanese Yen, which is traditionally a defensive currency, is up about 1% on the year.

Emerging Markets currencies have also been hit hard this year due in large part to concerns about global growth. However, it’s worth noting that the MSCI Emerging Markets equity index is weighted more heavily toward Asian countries whose currencies have performed a little better this year. If you look at the Chinese Renminbi or the Korean Won, these 2 Asian currencies are down about -2% and -7%, respectively. If you look at Latin American countries, which tend to be more represented in debt markets than in equity markets, the Mexican Peso and the Brazilian Real are each down more than 20%.

Can you explain the main driver of the cost to hedge, and how will recent Central Bank activity, such as the precipitous rate cuts from the Fed, impact that?

The most important driver of currency carry is going to be the short term differential in interest rates. And while interest rates have been cut dramatically by the Fed in the past month, and we’ve seen a significant rally in US Treasury yields across the curve, we’ve also had further Quantitative Easing measures by other central banks around the world. The US still maintains relatively attractive interest rates versus many of the other developed countries, and, as a result, there is still a positive currency carry to US investors who choose to currency hedge their international developed investments.

What has been the long and short term risk impact from currency exposure in international portfolios?

What has typically been observed over the long term, is that the decision to remain unhedged (i.e. to keep currency exposure) has most often increased the volatility that investors experience. It’s counterintuitive at times because the correlation is less than one, but it’s the leverage that currency brings into a portfolio that, far more often than not, results in higher overall risk. The most noteworthy observation one can really make in the short run, in my view, when it comes to risk, is that currencies have been impacted in recent weeks in a similar way to other asset classes, with a marked increase in volatility. Indeed one only has to bring up a chart of currency risk to see that it has spiked of late – as of course one would expect.