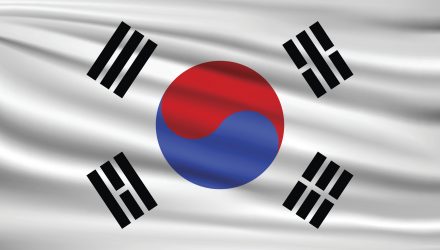 However, some market observers believe that while the summit was encouraging, regional geopolitical risks linger for South Korea, Asia’s fourth-largest economy.

“The summit meeting between the leaders of North and South Korea eases tensions on the peninsula, which have been elevated in recent months, but does not eliminate risks associated with the military stand-off,” said Fitch Ratings in a recent note. “The process of normalizing relations is likely to be lengthy and unpredictable, even if begun in earnest.”

EWY, which tracks the MSCI Korea 25/50 Index, holds 113 stocks. The $4.39 billion fund is one of the oldest and largest emerging markets single-country exchange traded funds.

“The long-term stand-off results in geopolitical risks to South Korea’s sovereign balance sheet. These relate not only to the potential for conflict, but also to the possibility of reunification costs arising over the long term,” according to Fitch.