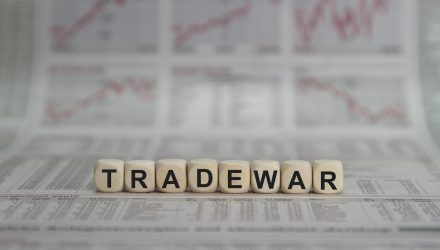 While the majority of the capital markets are scrambling to get tactical in the wake of what could be a protracted trade war between the U.S. and China, one area, the options market, appears seemingly unfazed by the latest tariff-for-tariff battle.

“The option market is indicating relatively muted downside in the wake of renewed US-China trade tensions,” said Garrett DeSimone, Head Quant at OptionMetrics. “Last week the S&P 500 (SPX) posted its worst weekly returns in a year with President Trump’s escalation of the trade war. However, the option market views the downside risks to these new developments as limited.”

When the markets are fed heavy servings of volatility, it helps to get tactical when it comes to using exchange-traded funds (ETFs). For the self-styled ETF tactician, one of the favorite tools in their arsenal is the SPDR S&P 500 ETF (NYSEArca: SPY).

“The implied volatility skew is a measure of the relative expensiveness of out-of-the-money puts compared to calls,” said DeSimone. “When the skew is large, it is an indicator of increased demand for puts as a measure of portfolio protection. While the skew has increased, it remains lower than during other recent downturns.”

“For example, it is relatively subdued at 6% compared to the volatility blowup in February 2018 (12%) and December selloff (9.5%),” he added. “This indicates that the market recognizes that while risks are present, it has not entered crisis levels over trade tensions.”

It’s a trend that manages to keep persisting, but why the continuous appetite for SPY? ETF mavens cite SPY’s over $265 billion in assets under management as one prime reason.

Being the biggest also allows it to be the most liquid so investors are never hard pressed for volume when looking to buy or sell SPY. For traders, it means they can get in and out with ease.

With trade wars roiling the markets the way they have been, getting in and out of securities is a plus, which is where SPY provides value for traders.

That being said, SPY doesn’t merely lend itself to the fly-by-night trader who feeds off the adrenaline rush of getting in and out of securities with requisite speed. It’s also flush with investors who are in it for the long haul–the buy-and-hold investor who values SPY for its liquidity in the markets, among other things.