You are at:Home»Smart Beta Channel»One Chart to Explain the Importance of Staying Invested 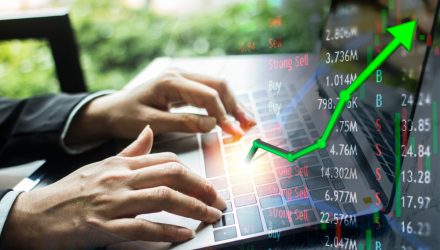 One Chart to Explain the Importance of Staying Invested

Market volatility has been soaring as of late thanks to the unprecedented uncertainty surrounding COVID-19. As is generally the case in these types of volatile market environments, investors may be thinking about pulling away from equities and waiting for events to settle down. But is that a smart move for investors in it for the long haul? Perhaps not if history is any guide.

Looking back over the past two decades, a $10,000 investment on January 2, 2000 in the S&P 500 Index would have been worth over $32,700 at the end of 2019. A solid return, but if you missed just the ten best trading days in the time period, a figure representing just ~0.2% of trading days, returns would have been cut in half. By missing those two weeks, the investment would have only grown to a little over $16,300 instead.

You cannot invest directly in an index. Past performance is not indicative of future returns. Returns and principal value will fluctuate and it is possible to lose money on any investment. Source: Bloomberg and DWS, 4/17/20.

Clearly, missing the best days can have an outsized impact on investment returns. But what is also striking about the chart above is how many of the best days were so close to—or were in—tumultuous market periods. Two of the ten were in 2002, while the rest of the list was in 2008-2009. Indeed, the worst and the best single trading days for the S&P 500 in the entire twenty year time frame happened in the same calendar week.

This suggests that pulling out of the market in rough times—sometimes when it appears the darkest—is actually the time when investors can potentially recoup the most of their losses from the initial crisis. As shown in the chart above, those that missed the best days in the uncertain time of 2008-2009 have not been able to recover relative to their peers who simply left their money in the market.

Obviously, it is nearly impossible to time the market to either miss the worst days or ensure that you will tap into the best. However, the historical record above shows how severe the penalty can be for missing the best, particularly over a long time frame, suggesting many would be better served by simply staying invested.

In the scheme of things, ten days out of twenty years is pretty insignificant. But when it comes to investing, it can result in exceptional differences in total returns. Missing the 10 best days in the market over the past twenty years would have cut returns in half for those investing in the S&P 500 across the time period.

That’s why it may be so important to stay invested; the cost of missing the best days can be nearly insurmountable as the years pass by. This is a tough lesson in volatile markets, but as history has shown us, these uncertain times are also capable of producing some of the market’s best days. And without those rebound sessions, investors may be putting themselves in a hole that could prove difficult to climb out of in the years ahead.