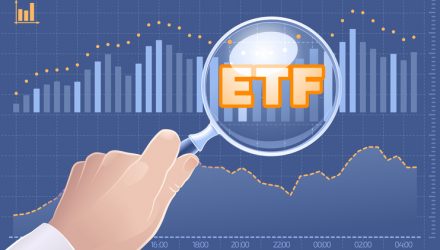 As the exchange traded fund universe expands, non-transparent offerings could mark the next stage of the maturing ETF industry.

The introduction of non-transparent ETFs that are not required to disclose holdings on a regular basis could create big waves in an industry largely known for its highly transparent nature. Doug Yones, head of exchange-traded products at the New York Stock Exchange, argued that non-transparent ETFs could take the ETF world by storm, CNBC reports.

After the Securities and Exchange Commission recently approved the first non-transparent ETF, we may see increased activity in this segment of the market.

“It’s a watershed moment for the whole ETF industry,” Yones told CNBC, adding that the move could “dramatically” grow the ETF market.

“There’s something like $17 trillion in actively managed funds that have not been able to access the ETF market unless the star manager’s willing to show everything in the portfolio. This will give them a chance to enter,” he added.

Many traditional active fund managers are loath to switch over to the ETF structure due to its highly transparent nature since ETFs tend to update their holdings on a daily basis for all to see. Active managers fear that this transparency would allow frontrunners to potentially get in on a trade ahead of the active fund or steal a manager’s secret sauce.

The ETF industry has accumulated $4 trillion in assets under management, but the majority of invested money remains in index-based equity ETFs that show holdings on a regular basis. Yones plans to capitalize on the potential growth opportunity of non-transparent ETFs as more money managers consider the more efficient ETF investment vehicle.

“We’re hoping to start to roll out this program within the next couple of months where we’ll actually bring ETFs back down to the [NYSE] floor, where you have the designated market maker that can add the human component to trading ETFs,” Yones said.

“We’re going to bring the power of the floor, the magnitude of that designated market maker — the person that’s responsible to be there — to add liquidity, but also reduce volatility,” Yones added. “We’ve offered this to the greatest companies in the world for over 227 years. It’s time to offer that back to the ETF industry.”