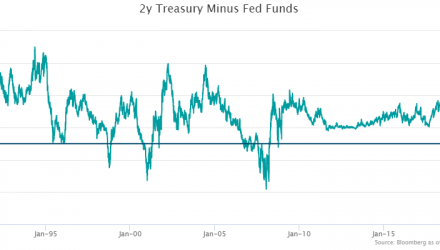 The typically sleepy bond market has woken up this year and is flashing bright red warning lights to investors. Take the two year Treasury rate for example which during the recent cycle peaked at around 3% in early November 2018.

Since then, the two year has rallied over a percentage point to 1.8%. The last time the two year rallied over 100 basis points corresponded to the start of the GFC (Global Financial Crisis). The bond market is pricing in various risks including trade wars with China and Mexico, slowing economic growth, and persistently low inflation to name a few. Most importantly, Fed expectations have taken a U-Turn with the market quickly moving from a hiking cycle to now expecting future cuts. The chart below shows the probabilities of a July rate cut, which now is approaching 90%. 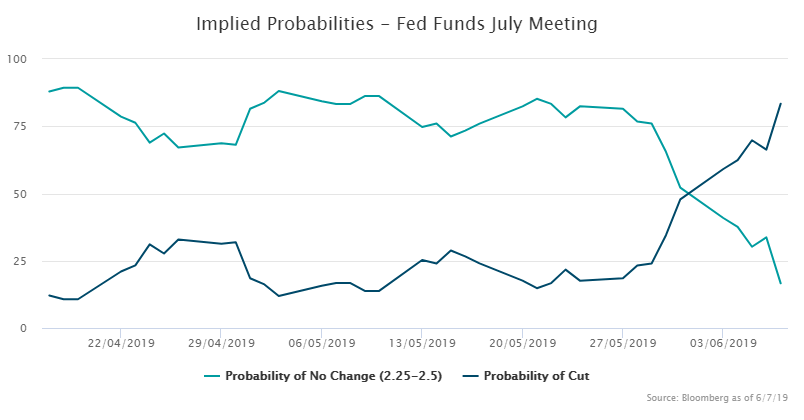 Market expectations for a rate cut are led by falling short end rates. If we look back just over 25 years, we find that the spread between the 2y Treasury yield and the upper bound of the Fed Funds target range is down to levels that have coincided with the first rate cut in an easing cycle.

The chart above shows that over the past 25 years when the two year Treasury rate falls by over 50 bps below the Fed funds upper target rate, the Fed has moved to cut rates. The negative slope of the short term Treasury term structure is implying that future cash rates are expected to be lower by at least two rate cuts.

What makes this period so fascinating is that the US unemployment rate is at multi-decade lows and the S&P 500 is close to all-time highs. In theory at least, the Fed has little reason to cut rates. In this respect, the Fed is in a tough spot, if the Fed doesn’t plan to cut, it will need to walk back market expectations which could bring more volatility. Fasten your seat belts because it should be an interesting ride.