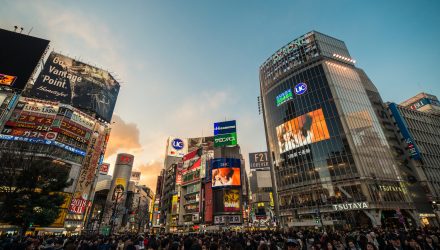 As U.S. equities have recently been the land of rising volatility, it could be investors flocking towards the land of the rising sun via Japan-focused exchange-traded funds like the WisdomTree Japan SmallCap Dividend UCITS ETF (NYSEArca: DFJ).

As the threat of trade wars permeate the capital markets, volatility rained down on U.S. equities and saw the Dow Jones Industrial Average fall as much as 600 points before settling for a 473-point drubbing at the close of Tuesday’s trading session. It was the Dow’s worst loss since January 3 as the wall of worry got taller over U.S.-China trade talks deteriorating.

With China equities in a funk, investors can look to opportunities elsewhere, such as DFJ. The fund is up 5.60 percent thus far year-to-date.

Rafi Aviav, WisdomTree Head of Product Development in Europe, said, “The WisdomTree Japan SmallCap Dividend UCITS ETF taps into the Japanese domestic economy while offering exposure to the size and value factors, which have been the clear winners from a factor perspective in Japan in the past decade[3]. The index has a live track record of more than 10 years, through which it has outperformed its small-cap benchmark by 1.7% per annum and its large-cap benchmark by 3.4% per annum, while maintaining low correlations (around 0.5[6]) with European and US markets, true to its domestic focus.  We believe this fund offers a unique way to access Japanese small-caps and it is particularly relevant in these times, when global free trade may be challenged.”