The Chinese economy seems to be at a crossroads. Long focused on exports and free trade to power its growth, the country is now faced with tariffs from its key trading partner and economic titan, the United States.

At face value, these trade issues appear as though they could be disastrous for the Chinese economy and could potentially derail the nation’s multi-decade growth story. However, is that really still the case?

In some ways, China has been dealing with the bursting of its export ‘”bubble” for much of the last decade. As shown in the chart below, the period right before the Great Recession was the high water mark for China’s exports as a percentage of gross domestic product (GDP). Since then, figures have declined sharply and are back to early 2000s levels for this key metric. 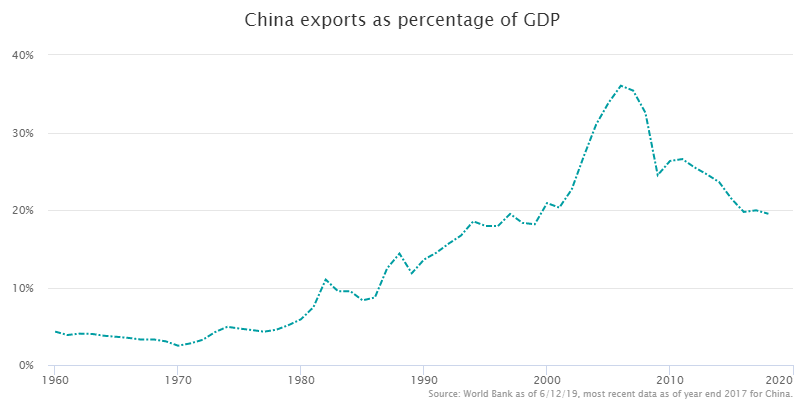 In fact, this statistic is now actually far lower than what is observed in some of the globe’s most traditionally export-focused countries. For example, both Germany and South Korea are in the 40% range for this metric, highlighting China’s apparent shift away from exports.

While this seems as though it could be a sizable negative for the country, it instead may have been a blessing in disguise in some respects. It has forced China to realize the perils of focusing so heavily on exports at this stage of its growth, and it shows the importance of developing a robust service and consumption side of the economy. Fortunately for China, average annual private consumption has been accelerating this millennium, while services now account for more than half of the economy1: 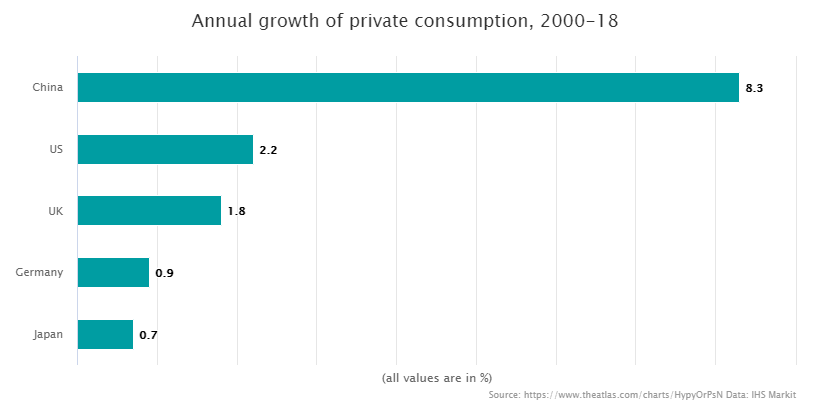 These two key factors have allowed China to maintain solid levels of growth despite its reduced reliance on exports. Also, if another international economic dislocation happens, China may be better prepared for outside shocks

These trends are what makes the timing of the potential tariffs so intriguing for the Chinese economy. While exports are still a vital part of the country’s economic picture, they are by no means what they used to be.

Instead, services are a growing majority and consumption was responsible for over three-fourths of China’s GDP growth in 2018. Exports were even a net drag on growth last year, according to the National Bureau of Statistics via CNBC 2. Additional taxes and the potential for reduced demand due to a trade war suggests that these trends are unlikely to reverse anytime soon.

In other words, tariffs or not, it appears as though China’s export-focused era may be over for now, possibly with a consumption-centric model taking its place. If anything, tariffs likely further strengthen China’s need to diversify its economy away from exports and become more focused on domestic opportunities for growth.

The global financial crisis was a wakeup call for the Chinese economy. It was a sign that a system built solely on exports was unlikely to be able to consistently deliver the growth that the country’s regime desired.

That is why China has begun to capitalize on its impressive income growth and is now refocused on its domestic economy. Tariffs are unlikely to change this. Instead, in a twist of fate, tariffs may merely act to strengthen and accelerate China’s already-in-progress economic transformation, acting as further fuel for the fire in terms of China unlocking its consumption potential.