The Euro – For He’s Not a Jolly Good Fellow

Despite earlier incarnations, a reasonable date for the euro’s actual birthday is 1st January 1999 when it became fully usable and tradable (though the physical notes and coins didn’t appear until 1st January 2002). And, for a currency that has only just entered into adulthood, it’s fair to say that it is punching above its weight – according to the Bank for International Settlements’ 2016 Triennial Survey of FX, more than 30% of all over-the-counter FX transactions involve the single currency, making it the second most important currency in the world behind the venerable US dollar.

But, global heft aside, the question for a US investor around this key birthday is: has the euro been a jolly good fellow; or, paraphrasing, how beneficial has holding the euro been? For those that have accessed euro-denominated assets – be they stocks, bonds, or real estate – and elected not to hedge out their currency exposure, what has been the impact of that decision? The euro may have (so far) proved its chops at surviving various crises, but has it, and can it, prove its chops at justifying a place in a US investor’s portfolio?

In our view, this question is best answered through an examination of the four key metrics that matter when considering the role that international currency plays in a portfolio. These metrics are:

At the time of writing, the euro has had 1,034 weekly returns, and Figure One shows the histogram of all of them. Here is our take on the broad conclusions that an investor could draw when looking at this return data for the euro: 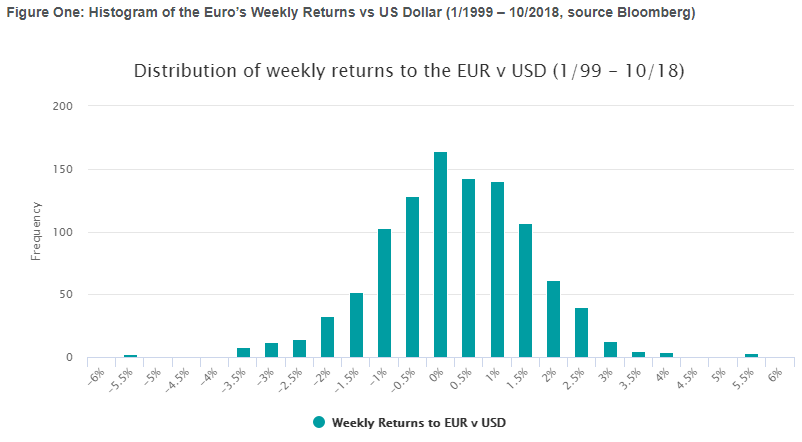 So if it’s fair to say that the weekly returns to the euro have been mean zero, and therefore not particularly helped a US investor, the next obvious question is, how can that have hurt? And, the answer of course lies in return’s, often overlooked, partner – risk.