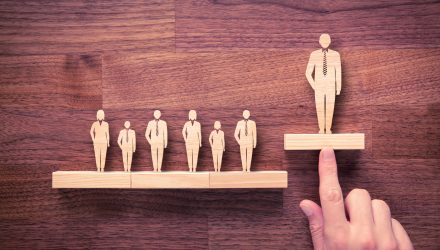 As more investors turn to alternative index-based strategies or smart beta ETFs, large players like BlackRock and Vanguard have been among the winners in the new grab for assets.

BlackRock smart beta assets have surged by almost 180% to $288 billion over the past five years, reports Attracta Mooney for the Financial Times. Only BlackRock and Vanguard have accumulated over $100 billion in smart beta products.

The rapid growth of smart beta in recent years “is sustainable for quite some time,” Rob Nestor, head of iShares smart beta at BlackRock, told the Financial Times, adding “we believe we are just in the early days of adoption.”

The smart beta ETF strategies have grown in popularity as more investors look to the nifty investment vehicle to capture what has been traditionally active styles in a cheap index-based fund wrapper to potentially enhance returns and diminish short-term risks.

Smart beta ETF providers have benefited from their position as the world’s leading ETF sponsors, incorporating their decades of experience in traditional factor-based investment styles taken from their active management team to craft their own factor-based index ETFs.

Looking ahead, the big will only likely grow bigger, leaving competitors in the dust.

“It will be exceedingly difficult for anyone to catch up,” Ben Johnson, director of global ETF research at Morningstar, told the Financial Times. “The lead they have could shrink a bit, but I don’t think anyone can overtake them.”