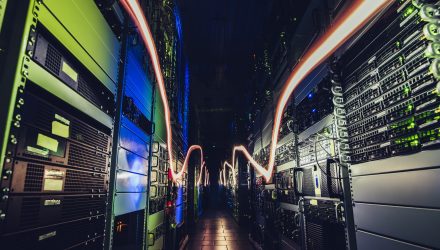 A slew of growth and technology exchange traded funds sagged Thursday after shares of social media giant Facebook Inc. (NASDAQ: FB) opened down 20%, putting the stock on pace for its worst day since Facebook went public.

While earnings per share were reported on Wednesday at $1.74 versus $1.72 consensus estimates, Facebook stumbled on revenue, reporting $13.23 billion versus an expected $13.36 billion. Meanwhile, global active daily users came in at 1.47 billion while estimates were 1.49 billion.

Count the NuShares ESG Large-Cap Growth ETF (BATS: NULG) among the ETFs that was able to avoid a Facebook-induced slide yesterday. In fact, NULG spent a good part of the day trading modestly higher due in large part to the fact that it does not own shares of Facebook.

Many ETFs adhering to environmental, social and governance (ESG) standards are heavily weighted to the technology sector and some of those funds feature Facebook exposure. NULG does not and it flirted with all-time highs on Thursday.

NULG follows the TIAA ESG USA Large-Cap Growth Index and allocates nearly 35% of its weight to technology sectors, making the absence of Facebook all the more interesting. The stock is excluded, in part, because of data privacy concerns.

Nuveen’s ESG ETF methodology follows four key components, including ESG rating or captures an issuer’s performance on key ESG risks relative to peers; controversy score or an issuer’s exposure and response to event-driven controversies; controversial business involvement or issuer’s activity in industries that may cause significant social harm like tobacco; and low carbon criteria or the carbon intensity of an issuer based on involvement in certain industries.