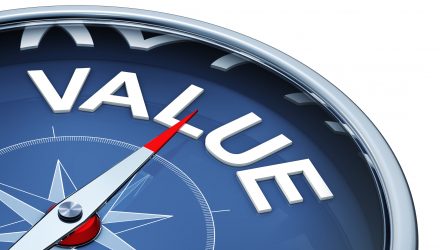 As has been widely documented, the value factor is trailing its growth and momentum counterparts in 2017. However, that could laggard status could open the door to opportunity to dedicated value exchange traded funds in 2018. That includes the iShares MSCI USA Value Factor ETF (CBOE: VLUE).

Value investing is a popular long-term investment strategy. Value stocks have historically outperformed growth stocks, or companies with high earnings expectations, in almost every market over the long-haul. For instance, the MSCI USA Value Index has outperformed the MSCI USA Growth Index by an annualized 81 basis points since 1974 through September 2015.

“As markets climbed higher in recent weeks, investor sentiment seems to have turned from doubt to acceptance. Economic growth is above trend in most regions in the world, keeping us aloft, but we don’t appear to be soaring too dangerously and in peril of overheating,” said BlackRock in a recent note.

VLUE “seeks to track the performance of an index that measures the performance of U.S. large- and mid-capitalization stocks with value characteristics and relatively lower valuations, before fees and expenses,” according to iShares.

The $2.8 billion VLUE, which is four and a half years old, may be a surprise to some investors as the ETF allocates over 24% of its weight to the technology sector, a group that has been viewed as richly valued this year. Financials services and healthcare stocks combine for over 27% of VLUE’s weight.