You are at:Home»Smart Beta Channel»China ETFs Could Look Different as the U.S. Blacklists Military Companies 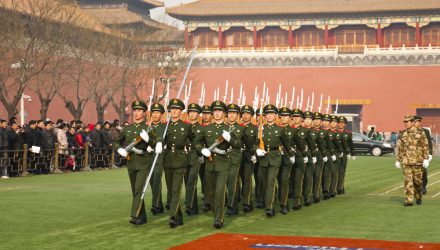 Index providers and exchange traded fund issuers that track Chinese markets will have to trim some China state-owned holdings after the U.S. restricted investments in companies backed by Beijing.

“We would expect all index providers to ultimately remove some Chinese securities in an effort to comply with the U.S. restrictions,” Todd Rosenbluth, head of ETF and mutual fund research for CFRA, told Reuters, adding that the actions seem to have limited impact on most U.S. investors since few large Chinese companies have been restricted so far.

These index changes will affect index-based ETFs, notably those tracking China A-shares markets, such as the Xtrackers CSI 300 China A-Shares ETF (NYSEArca: ASHR), one of the most popular ETFs that tracks mainland Chinese markets. ASHR targets the 300 largest and most liquid stocks in the China A-shares market that trade on the China Securities 300 Index.

The question will be how deep the restrictions will go. If it’s just a few names, it will send a message, but not cause major market damage. It remains to be seen whether or not the incoming Joe Biden administration will expand on these restrictions, or even maintain them going forward.