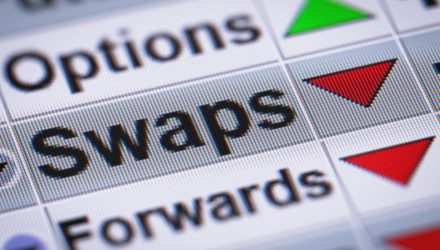 Global investment firm BlackRock is delving into a strategy that it hasn’t accessed in about 10 years. The strategy, using derivative contracts known as swaps, is the foundation for its new exchange-traded fund (ETF) introduced to the European capital markets.

“BlackRock has performed a volte-face and launched a swap-based equity exchange traded fund, entering a market it had avoided for nearly a decade following chief executive Larry Fink’s vehement criticism of the structure,” a Financial Times article said.

“BlackRock has been the flag-bearer for physical ETFs for many, many years. They were very critical of the idea of synthetic ETFs and here they are launching one,” said Jose Garcia-Zarate, associate director of ETF strategy at Morningstar, the fund data provider.

At the center of this strategy is the concept of synthetic ETFs like the Short Term High Yield Bond ETF (SHYL). The ETF itself won’t have holdings of equities as say a passive or active fund that purchases shares of stock, but rather, a swap contract sits at the heart of the strategy.

This explains BlackRock’s initial reticence to swaps–they were a popular investment vehicle before the global financial crisis over a decade ago.

“So-called synthetic ETFs rely on having a swap contract in place with a counterparty to replicate the performance of the underlying assets, rather than actually owning the assets themselves, as a “physical” ETF does,” the FT article explained. “They fell out of favour in the wake of the global financial crisis when regulators such as the Financial Stability Board and IMF raised concerns over counterparty and liquidity risks, but have started to attract interest recently due to their tax advantages.”

This isn’t BlackRock’s first rodeo with respect to the world of synthetic ETFs.

“The world’s largest asset manager did launch swap-based equities ETFs in 2010, though it subsequently closed them,” the article noted. “It has continued running swap-based commodity ETFs, particularly for soft commodities where holding the physical product is awkward and in contravention of Europe’s Ucits fund rules. Brett Pybus, head of Emea investment and product strategy at BlackRock’s iShares arm, said there was now an ‘enhanced S&P 500 ecosystem” to allay concerns around “a number of areas where we have been vocal in the past.'”

Given that the firm has the largest market share of ETFs under their iShares brand, needless to say, they’re aware of the risk involved this time around.

“There have been improvements in the type of products available [in terms of]the transparency of the collateral basket,” Mr. Pybus added. “These products are well structured with multiple swap counterparties who don’t have an affiliation to the issuer. It’s a more robust infrastructure. There is greater client comfort with the structures we have seen in the market.”