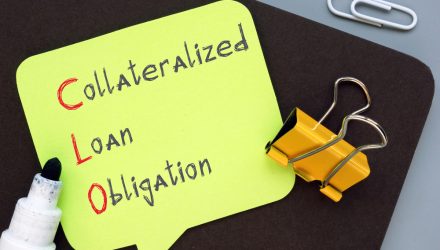 Are CLO ETFs Right for You?

Collateralized loan obligations (CLOs) were popular just before the financial crisis over a decade ago and they’re starting to make a reappearance in the exchange-traded fund (ETF) space. Given their history, are these investments right for the retail ETF investor?

As a Barron’s article explained, CLOs “are securities backed by a pool of corporate loans. The market for them has grown larger and more liquid over the past few years, and now seems mature enough for wider adoption. Alternative Access Funds—a start-up fund manager founded in 2018—launched the $10 million AAF First Priority CLO Bond ETF (AAA) in September. The Janus Henderson AAA CLO ETF (JAAA)—with much larger seed assets of $120 million—began trading Monday.”

“Many investors might associate CLOs with CDOs, or collateralized debt obligations, which earned a great deal of notoriety due to their leading role in the last financial crisis. The two instruments are similar in that they both bundle debt and sell to investors in slices, but different in their underlying offerings,” the article mentioned.

Despite this, CLOs are actually safer than they used to be, according to Wells Fargo CLO analyst David Preston.

“The default risk of CLOs is extremely low, even much better than many corporate high-yield bonds,” said Preston.

The article mentioned that “more than 12,500 CLO tranches rated by the S&P Global, only 40 have ever defaulted—and none of them were AAA-rated, where the two new ETFs primarily invest.”

With this new revival in CLOs, the capital markets are responding positively. It appears the sordid past associated with the financial crisis might not be having the impact it once had as the memory of 2008 to 2009 starts to fade.

“As money managers have become buyers and sellers of CLOs, trading volume on the secondary market has increased significantly,” the article said. “This has enabled the launch of retail-oriented products like ETFs. The AAF and Janus Henderson CLO ETFs are both actively managed and only invest in the highest-rated tranches. Both own more than 30 CLOs, and charge an expense ratio of 0.25%.”

Still, investors have to do their due diligence and CLOs won’t be an ideal fit for everybody. The financial crisis will still linger in the minds of many investors.