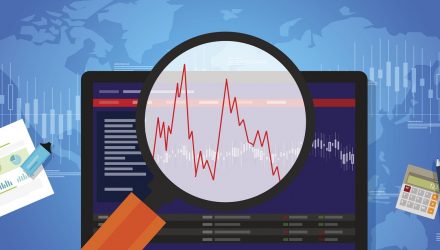 “During the past three months, cyclical sectors, such as energy, materials and technology, have fallen by at least 10%,” said BlackRock in a recent note. “Conversely, more classic defensive sectors, notably utilities and consumer staples, have defied the broader market and posted positive gains.”

USMV holds 214 stocks. While the ETF’s largest sector weight is technology at 15.68%, an anomaly among low volatility strategies, the fund devotes over 28% of its combined weight to the defensive healthcare and consumer staples sectors.

While the U.S. economy is mostly on firm footing with fourth-quarter GDP expected to check in at 2.5% growth, some market observers advise preparing for a slowdown in global economic output next year.

“Fourth quarter growth is still expected to come in at a relatively healthy 2.5%. The problem: That is probably as good as it gets for a while. A growing conviction in a slowdown is clear in recent investor behavior,” according to BlackRock.