You are at:Home»Smart Beta Channel»5 Reasons to Consider A China Investment Now 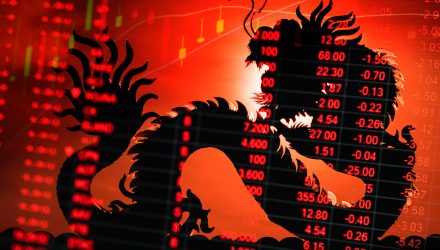 China’s growth trajectory over the past few decades has been downright impressive. But is the run nearing an end? After all, trade tensions remain high and China’s economy has slowed from its breakneck pace.

While there is definitely some concern, that is by no means the full picture. The country actually has an attractive market for a variety of reasons, many of which give China long-term appeal. Five reasons stand out as key factors for a China investment now, and in our view they more than outweigh the negatives:

Too Big to Ignore

More than anything, the reason to watch China is that it is simply an unavoidable economic force. This is best evidenced by its incredible rise since the start of the millennium. Since 2000, the economy has grown nine-fold.

China is now the second largest economy in the world, accounting for a full 15% of the global economic pie. As shown in the chart below, this is a massive change from 2000, and demonstrates just what a serious economic competitor the giant has become in under two decades:

One Belt One Road

This influence over the global landscape is unlikely to dissipate in the near future. Not only is China still growing its economy at a healthy clip, but the nation is quickly expanding its ‘One Belt One Road’ initiative.

This is basically a resumption of the Silk Road but will feature modern infrastructure such as pipelines, railroads and ports. In theory, it should also tighten economic relations between China and much of Asia, not to mention Africa and Europe as well. And since China is already the top trading partner for 124 countries without this new infrastructure system, the potential is near limitless for the country to deepen its trade ties even further as this plan comes to fruition.

One of the biggest reasons to consider a China investment now is the inclusion of Chinese A-Shares into MSCI-linked indexes. An astounding $6 trillion is benchmarked to indexes that could include Chinese A-shares, so sizable inflows into this market are expected from benchmark-trackers.