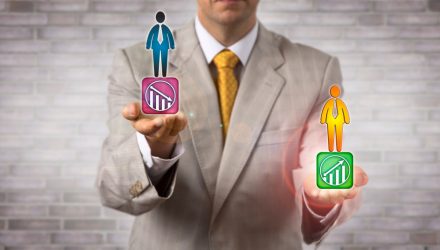 Small and Mid-Cap ETFs Could Continue to Underperform

Small- and middle-capitalization exchange traded funds may underperform their large-cap peers as smaller companies face a steeper uphill battle whereas larger companies have benefited the most from government aid.

“For our economy to be fully operational again it can’t be this bipolar economy,” Fink told Bloomberg. “There’s been a lot of healing, and that’s what the market is reflecting, but there’s still a great component of our economy that hasn’t healed and is still struggling.”

Small-capitalization stocks have historically performed more strongly and outperformed the broader market as the economy lifts itself out of a recession and shifts into the recovery process during the normal business cycle. These smaller companies benefit the most from access to low interest rates, which helps fund their quicker growth. However, the economic downturn this time around has been anything but normal.

The government has enacted copious stimulus measures to help lift businesses back onto their feet after the coronavirus shutdown measures were put in place. Investors, though, should note that small-cap stocks are often not considered small businesses, which the government typically defines as those with under 500 employees. Consequently, they don’t have access to funds earmarked for those firms, nor do they have the investment-grade rated debt the Federal Reserve has been buying to stabilize markets.

The small-cap benchmark is also dominated by cyclical sector stocks like banks, which tend to underperform during market downturns and have been particularly weighed down after the Federal Reserve cut interest rates.