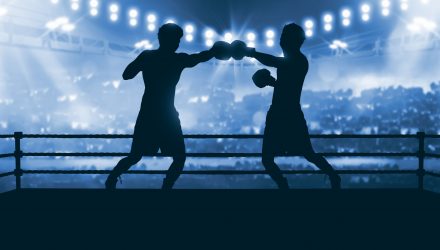 On March 17, 1990, a boxing match between Julio Cesar Chavez and Meldrick Taylor, dubbed “Thunder Meets Lighting” pitted two undefeated world champion pugilists vying to keep a loss off their unblemished records. With Taylor winning much of the fight on the scorecards, an accumulation of devastating punches by Chavez caused the referee to eventually stop the bout in the 12th and final round, giving Chavez the victory–is the VictoryShares US Small Cap Vol Wtd ETF (Nasdaq GM: CSA) suffering the same fate against the large-cap focused VictoryShares US 500 Volatility Wtd ETF (NasdaqGM: CFA)?

Tale of the Tape

CSA seeks to provide investment results that track the performance of the Nasdaq Victory US Small Cap 500 Volatility Weighted Index, which is an unmanaged, volatility weighted index. The index identifies the 500 largest, profitable U.S. companies with market capitalizations of less than $3 billion measured at the time the index’s constituent securities are determined.

On the other side, CFA seeks to provide investment results that track the performance of the Nasdaq Victory US Large Cap 500 Volatility Weighted Index, which is an unmanaged, volatility weighted index. The index itself identifies the 500 largest, profitable U.S. stocks by market capitalization measured at the time the index’s constituent securities are determined.

In a matchup of CSA versus CFA, CSA was similar to Taylor–quicker with the edge on hand speed versus Chavez–like CFA, the relentless hitter with heavy hands. In the year-to-date chart, CSA took the early lead around the middle of May, which is the same way Taylor boxed his way to an early advantage in scoring.

“One of our criteria is that companies have to be profitable,” said Mannik Dhillon, President of Victory Shares and Solutions at Victory Capital, told ETF Trends. “That actually eliminates more companies in the small cap space and essentially gets rid of the ‘junk.’ This can have a bigger impact on relative performance compared to a lower quality index like the Russell 2000.”

In May, however, the tide turned, and investors began gravitating to small caps versus large caps. When looking at the three-month chart, an unrelenting CFA seems to have regained advantage as CSA appeared to be fading. Yet sentiment can be mercurial, and nobody can anticipate these shifts with any real consistency.