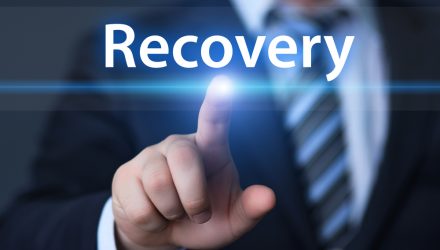 Small-Cap Value ETFs Could Outperform in a Market Recovery

Small-capitalization stocks, especially those leaning toward the value style, and related exchange traded funds have been among the worst-performing broader segments of the U.S. markets, but they could begin to outperform as the economy recovers from the coronavirus lockdowns.

In the first quarter of this year, the Fama French U.S. Small Value Index, which follows the small-cap value category, suffered through the worst quarterly performance in its 94-year history, the Wall Street Journal reports. The benchmark dropped 41.5% over the three months ended March 31, compared to a 19.6% decline for the S&P 500 over the same period.

Like large-cap stocks, the small-cap counterpart has regained ground in the weeks since, but small-cap value stocks are still among the market’s biggest losers so far this year. According to Morningstar data, the more than 140 mutual funds and exchange-traded funds that focus on small-cap value had average losses of 37% in the first quarter, and year-to-date losses for small-cap value funds narrowed to an average of 28% at the end of April and 25% at the end of May.

Jim Paulsen, Chief Investment Strategist at investment-research firm Leuthold Group, pointed out that value stocks are more sensitive to the rise and fall of the economy than many growth stocks. Value also tends to track the inflation rate, and in the first quarter, the economy and inflation both slowed sharply.

Meanwhile, the cost of borrowing for riskier companies, which include many smaller ones, surged in late March. The high-yield spread hit its highest level since 2009, or during the global financial crisis.

Looking ahead, small-caps could outperform as revenue picks up, and revenue typically has a proportionally greater effect on operating income for smaller companies.

“Coming out of a recession these [smaller value]stocks will rally more because of their operational leverage,” Bob Male, a portfolio manager at Buffalo Funds, told the WSJ.

Looking at historical data from 1965 to 2019, Verdad Advisers also found that when high-yield spreads rose above 8 percentage points, over the following 12 months, the smallest, cheapest stocks were up 48% on average, compared with an average increase of 13% for the S&P 500. In the seven years from the end of 1999 through December 2006, stocks that were both in the smallest 10th percentile and in the cheapest 10th percentile based on free cash flow posted a total return of 530%, compared to 8% for the S&P 500.