You are at:Home»Equity ETFs»Small-Cap ETFs Look to Rally After a Rough October 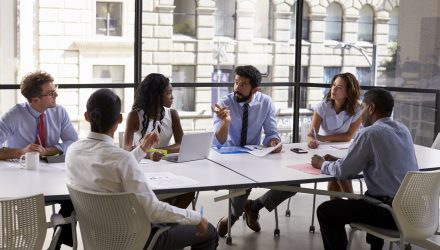 Small-Cap ETFs Look to Rally After a Rough October

Small-cap stocks and the related exchange traded funds were among the assets that were drubbed as stocks tumbled last month.

The iShares Russell 2000 ETF (NYSEArca: IWM) suffered a double-digit loss last month and still resides nearly 11% below its 52-week high, but the benchmark small-cap fund is up nearly 5% over th past week.

“So while it’s plain to see why IWM was punished more harshly than its peers in this latest round of selling, it’s worth pointing out that the fund still has several layers of support in place to stem further bleeding, should volatility continue to haunt equity markets in the weeks ahead,” according to Schaeffer’s Investment Research.

Small-capitalization stocks have attracted a lot of attention on the escalating trade tensions, fueled by fears over a potential slowdown in global growth. Consequently, many anticipated that small-caps could weather the storm as large multi-nationals with a large global footprint suffered from trade disputes. However, the U.S.’s recent trade agreements with Canada, Mexico and the European Union have reversed the play.

What’s Next for Small Caps

Bank of America Merrill Lynch analysts also warned that small-cap’s are now highly leveraged and rely on a smooth economic environment. Excluding financial companies, the Russell 2000 Index’s corporate debt was roughly 3.5 times earnings before interest, taxes, depreciation and amortization, or close to all-time highs hit in the early 2000s and above the 1.8 times EBITDA ratio for the S&P 500.