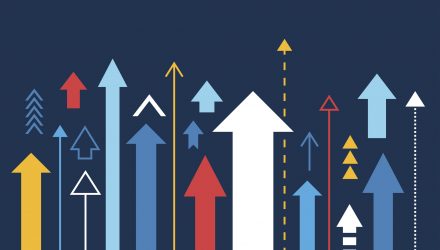 For much of the current bull market in U.S. stocks, growth has outperformed value, particularly among large-caps. Some signs are emerging that trend could be ready to change, but for investors looking for out-performance with growth stocks, small-caps remain the place to be.

“In July, the total return of the S&P SmallCap 600 Growth was 3.75%, which was 1.15% higher than the total return of 2.60% generated by the S&P SmallCap 600 Value,” said S&P Dow Jones Indices. “This is interesting since typically growth does not outperform value in small caps when value outperforms growth in large and mid caps.  In 255 months, going back to May 1997, there are only 17 times when growth outperformed value in only small caps.”

While small-caps have outperformed and continued to attract investment interest, some analysts warned that the strong corporate earnings and economic data could conceal tariff’s potential negative impact on small businesses.

The $6.68 billion IJT holds 331 stocks. As a growth fund, it is reasonable to expect IJT have some rich earnings multiples. A price-to-earnings ratio of almost 27 confirms as much, but that is not alarmingly high among growth funds.