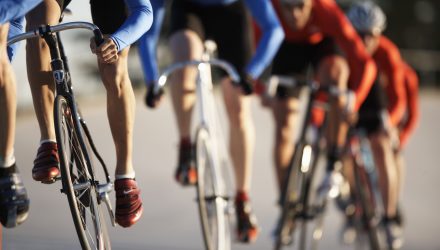 “Small caps are outperforming large caps (S&P 600 (TR) – S&P 500 (TR)) in H1 2018 by the most in eight years, since H1 2010, from growing  concerns over rising tariffs and general U.S. foreign trade policy. In the past four months, the smaller companies have outperformed larger companies by 10.1%, contributing to the 5th biggest realized small cap premium in the first half of any year in history,” according to S&P Dow Jones Indices.

Furthermore, the upbeat pace in U.S. small-caps are attracting foreign investors as well. According to the CME Group, there is growing interest among global investors for U.S. small-cap exposure, especially with volume coming from Europe, Asia-Pacific and Latin America regions in addition to North America.

“The smaller cap stocks are less sensitive to international relations generally from the higher percentage of revenue generated in the U.S., though they are still impacted by sector fundamentals and the percentage of exports of foreign output since the U.S. economy is largely driven by consumer spending,” said S&P Dow Jones. “Overall, U.S. small caps in the S&P 600 generate nearly 80% of revenue domestically, whereas U.S. large caps in the S&P 500 only generate just over 70% domestically.”