You are at:Home»Featured»Singles Day Beckons for EM E-Commerce ETF 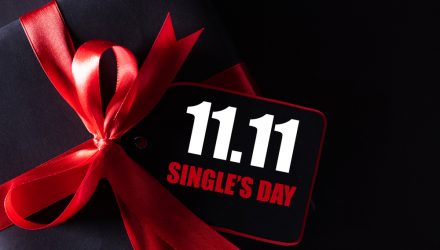 China’s Singles Day, one of the world’s largest retail events, arrives Thursday. Against the backdrop of heavy regulatory scrutiny that resulted in severe punishment for a slew of previously high-flying Chinese consumer internet stocks, this promises to be a Singles Day unlike any other.

That doesn’t mean that the Emerging Markets Internet and Ecommerce ETF (EMQQ) isn’t a relevant idea this Singles Day. It is, and that’s particularly true as some of EMQQ’s marquee Chinese components are looking to move past Beijing’s wrath and get back to growing their top lines.

Meituan and Alibaba combine for 15.52% of EMQQ’s weight, according to issuer data. Overall, Chinese stocks represent nearly 62% of the exchange traded fund’s weight, by far the largest geographic allocation in the fund. South Korea is second at 6.6%.

One way that EMQQ’s Chinese member firms can put regulatory headwinds in the rearview mirror is by putting their money where their proverbial mouths are when it comes to contributing to China’s common prosperity plan. Some companies are already doing just that.

“Alibaba said it would give $15.5 billion over five years to foster social equality. The company also pledged to donate 1 yuan ($0.16) when Singles’ Day shoppers buy certain items and post their purchases on social media,” according to Bloomberg.

Another way that EMQQ’s Chinese components can gain favor with the Chinese Communist Party (CCP) is to show overt commitments to carbon-reduction efforts — something that Beijing is prioritizing because the world’s second-largest economy is one of the biggest polluters in the world.

Getting down to the business end of Singles Day and its potential impact, the event, which got its start in Chinese college culture in the 1990s, has long surpassed the sales delivered by Black Friday and Cyber Monday in the U.S.

If that happens again this year and previously established records are topped, EMQQ could benefit.