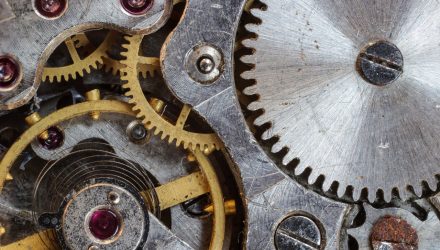 Even as their gold counterparts rally, the iShares Silver Trust (NYSEArca: SLV) and ETFS Physical Silver Shares (NYSEArca: SIVR) and other silver exchange traded products are scuffling this year.

“While gold yesterday touched 5-week highs against the Dollar at $1356 – heading for its highest quarterly finish since the 2013 gold crash – silver prices managed only a 2.5-week high, dipping today to $16.46 to head for a 2.6% loss from New Year 2018,” reports BullionVault. “With silver easing back in lock-step with gold today, the Gold/Silver ratio – which measures how many ounces of silver you could get for an ounce of gold – held at 81.3, just shy of this month’s peak.”

“With industrial use accounting for 55% of annual demand according to Washington-base trade group the Silver Institute, consumption of the metal is more exposed to poor economic growth and sentiment than gold, which now finds only 10% of demand from industrial applications,” according to BullionVault. “Last time the Gold/Silver Ratio held above 80 was in 2016, when the growth rate in world No.2 economy China slowed.”