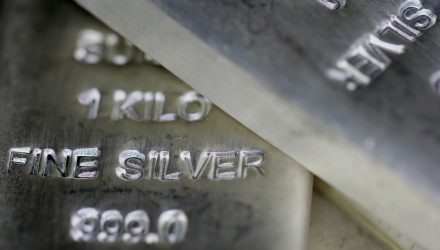 Precious metals are slumping this year. The SPDR Gold Shares (NYSEArca: GLD) and other gold exchange traded products are getting most of the negative attention. GLD, the world’s largest gold ETF, entered Tuesday with a year-to-date loss of 8.1%.

“With gold the most expensive relative to silver in more than 20 years, investors in exchange-traded funds are betting on the cheaper metal,” reports Bloomberg. “Bullion is about 85 times more expensive than silver per ounce, a ratio not seen since 1995. Both metals have been hammered this year, falling as the dollar rose and investors opted for the yield offered by stocks and bonds.”

Further dragging on silver prices, a strengthening U.S. dollar has made it more expensive for foreign buyers. The U.S. Dollar Index, which tracks the U.S. dollar’s moves against a basket of foreign currencies, has increased 4.5% so far this year. Precious metals have traditionally exhibited an inverse relationship to the greenback.

“While ETF holdings backed by gold have fallen 1.3 percent this year, those tracking silver have climbed 2.3 percent. The cheaper metal typically trades as a higher-beta asset, meaning an upturn in precious metals would tend to benefit long positions in silver more,” according to Bloomberg.