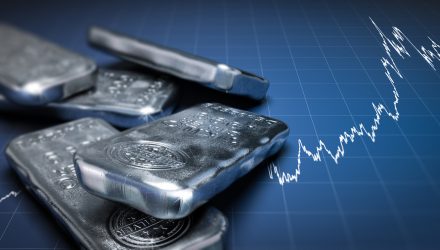 April showers can bring May flowers, but the fourth month of the year can also be rough on silver. That could be bad news for the iShares Silver Trust (NYSEArca: SLV) and ETFS Physical Silver Shares (NYSEArca: SIVR), which are already trailing their gold-backed rivals to start 2018.

SIVR and SLV are backed by physical silver. Late last week, options activity in SLV, the largest silver ETF, saw a noticeable increase in volume with most of that activity centered around $16.50 strikes.

“This region has served as an overhead ceiling for SLV shares for some time, with the last monthly close north of here coming in August 2017. What’s more, $16.50 coincides with a 23.6% Fibonacci retracement of the trust’s rally from July through September of last year. More recently, the shares have been chopping between support at $15.30 and resistance near $15.90 since early February,” according to Schaeffer’s Investment Research.

Data suggest professional speculators are heavily short silver. In fact, net speculator shorts in silver are at two-decade highs, indicating the potential for a short-covering rally for the white metal and ETFs like SIVR and SLV.

“This disappointing price action could continue over the next several weeks, if history is any guide. According to Schaeffer’s Senior Quantitative Analyst Rocky White, SLV has been one of the worst-performing exchange-traded fund’s (ETF) in April, turning in a positive monthly performance in just three of the past 10 years. On average, SLV returns 1.31% in April — a move that would put the shares right in the middle of their recent range, based on the current trading price of $15.40,” reports Schaeffer’s.