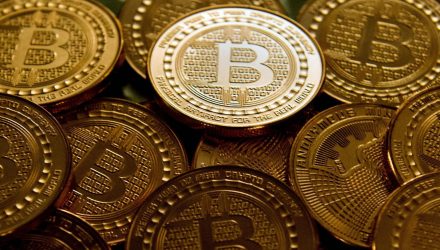 That stellar performance is not keeping short sellers away. In fact, some bearish traders are keen on GBTC and other bitcoin-related assets, including stocks with exposure to the high-flying digital currency.

“Since the start of October short demand has increased over 60%, compared with GBTC price increasing over 150%,” according to Markit. “Pressing against the trend has caused the value of the short position to increase to over $110 million. Aside from the bet against BTC price the shares of the trust were also trading at a premium to asset value, which has been pointed out as part of the motivation for shorting the vehicle.”

The ARK Web x.0 ETF (NYSEArca: ARKW) is one of this year’s best-performing non-leveraged ETFs due in part to a position in GBTC. ARKW is an actively managed ETF that focuses on disruptive companies that help transform the market and was the first ETF to invest in bitcoins after the portfolio manager acquired publicly traded shares of GBTC.

GBTC, which is quoted on the over-the-counter market, buys and sells bitcoin with a standard brokerage account in the U.S. and is structured as an open-end trust.