You are at:Home»Investing»Shaq O’Neal Gets a Slice of Papa John’s with Board Membership 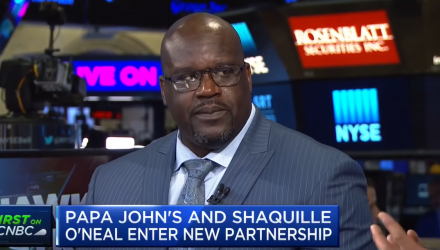 In an effort to repair its image, pizza chain Papa John’s went big with former National Basketball Association star Shaquille O’Neal by making the seven-footer the new face of its franchise. On Friday, Papa John’s announced that O’Neal, whose personality is as large as his frame, would become its newest board member.

The move comes as the pizza chain is trying to get back into the good graces of consumers after founder John Schnatter blamed the National Football League’s leadership for poor pizza sales. Moreover, Schnatter reportedly used a racial slur during a conference call, causing him to step down as chairman.

The series of controversial events caused Papa John’s to remove Schnatter’s image from its marketing materials and pizza boxes. The pizza chain hopes the addition of O’Neal will stem the tide of controversy that has caused its stock to fall 12 percent within the past year.

“The addition of Shaquille on the board, I think is really going to highlight what we need to do from a marketing standpoint to get those sales moving,” CEO Steve Ritchie said on CNBC’s “Squawk on the Street.”

“We are working through diversity not only on the board, but also the leadership team, franchise base and supplier base,” said O’Neal.

“The first thing when we met, what we talked about, was, you know, diversifying leadership roles and helping the African American community,” O’Neal added. “As I think about all of the stuff that went on, I worry about the 800 franchisees who did nothing wrong.”

O’Neal will become the board’s first African American director and an investor in nine Papa John’s restaurants throughout Atlanta. As part of its marketing efforts, O’Neal will assist with brand endorsement via television commercials as well as social and digital integrations.

It’s a move towards diversity that Papa John’s is making throughout the company.

“We are working through diversity not only on the board, but also the leadership team, franchise base and supplier base,” said Ritchie.

O’neal’s three-year endorsement deal will pay him $8.25 million with half coming in cash and the other half via shares in Papa John’s. It’s an $8.25 million effort to repair its image, which comes in addition to the $5.8 million spent on reimaging costs due to the Schnatter controversies.

Investors looking to add restaurant-focused ETFs to their portfolios can look to the following: