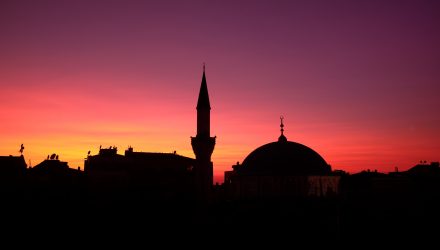 The rate hike did not stem the lira’s slump, prompting traders to continue selling TUR, which is down about 28% year-to-date. TUR also resides nearly 30% below its 200-day moving average, a level the ETF has not closed above since late in the first quarter.

“Interestingly, data suggests options traders had been betting on the $30 level acting as a floor for TUR. Peak open interest resides at the June 30 put, where more than 9,000 contracts were seemingly sold to open back on May 15. These put writers are hoping the ETF holds above the round-number mark for another three weeks, with the front-month options due to expire at the close on Friday, June 15,” according to Schaeffer’s Investment Research.

The Turkish economy has suffered from a widening current account deficit, double-digit inflation and recent comments from President Tayyip Erdogan whom called himself the “enemy of interest rates”.

TUR’s slump comes ahead of national elections in Turkey, which are slated for June. Last year, Turkish voters voted to disband the country’s parliamentary system and install a strong presidential form of government. That scenario, among others, contributed to strained diplomatic relations between the U.S. and Turkey.