You are at:Home»Equity ETFs»Saudi Arabia ETF Pops as Investors Wait on FTSE Decision 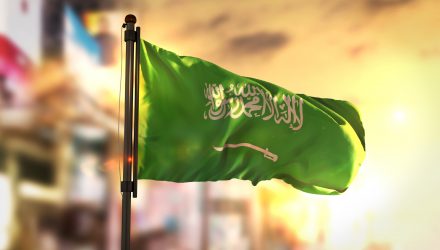 The iShares MSCI Saudi Arabia Capped ETF (NYSEArca: KSA) surged Monday as market participants wait on index provider FTSE Russell to potentially promote the country to emerging markets status. However, investors should note that KSA does not track an index from FTSE Russell.

With Monday’s rally, KSA’s year-to-date gain is around 11%. The ETF is up more than 6% this month. If FTSE Russell moves Saudi stocks to emerging markets status, some of those equities could eventually find their way into the Vanguard Emerging Markets ETF (NYSEArca: VWO). VWO, the largest emerging markets ETF in the U.S., tracks a FTSE index.

“An announcement from the index compiler is due on March 28, the first of two decisions that will potentially put the kingdom on the radar of fund managers, investors say,” reports Bloomberg. “MSCI Inc. will provide the second in June, with a positive outcome setting the stage for a planned initial public offering of shares in Saudi Aramco, expected to be the biggest ever and key to a series of reforms taking place in Saudi Arabia. The country’s main stock gauge is up 8.7 percent this year, versus 1.8 percent for emerging markets.”

Currently, index provider MSCI does not even classify Saudi Arabia as a frontier market, however it is a member of the MSCI GCC Countries Index, according to MSCI. The country has taken steps to liberalize its markets and make them more accessible to foreign investors in an effort to potentially draw the favor of index providers.