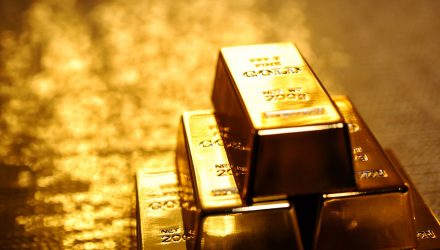 Buoyed by increased activity in Asia and Europe, global gold ETFs added assets in May, marking the third consecutive month of inflows.

“Global gold-backed ETF holdings added 15 tonnes(t) to 2,484t in May,” said the World Gold Council (WGC) in a note out Wednesday. “Europe and Asia drove inflows as European funds have responded strongly in the past two months. North American fund flows reversed their early 2018 trend as they lost 2.3% of assets, likely a result of the volatile prices in the gold market which left gold lower by 60bps (in dollar terms) on the month.”

Other regions are catching up to the gold ETF buying seen in North America earlier this year.

“European inflows have caught North American inflows on the year, while Asian funds have grown 20%, led by Bosera Gold ETF which has grown 114%,” according to the WGC.

The GraniteShares Gold Trust (NYSEARCA: BAR), which debuted last August, recently attracted $130 million in net inflows and now holds $156.5 million in assets under management. BAR has an annual fee of just 0.20%, making it one of the least expensive gold ETFs on the market.