You are at:Home»Investing»RWW: Not the Usual Financial Services ETF 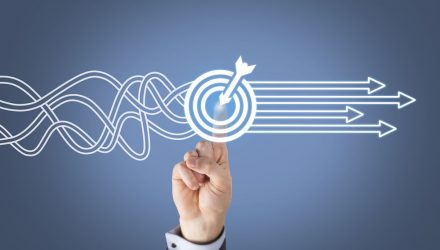 Amid a notable resurgence, the financial services sector is getting plenty of headlines. Many of the ETFs tracking the sector explain why. For example, the Oppenheimer Financials Sector Revenue ETF (NYSEArca: RWW) is up 3.5% this month, pushing its year-to-date gain to over 11%.

RWW is not the usual financial services ETF, which weigh stocks by market value. The Oppenheimer ETF provides exposure to the stocks in the S&P 500 Financials Index on a revenue-weighted basis. As a revenue-weighted ETF, RWW allocates 15.6% of its weight to Warren Buffett’s Berkshire Hathaway (NYSE: BRK-B), one of the largest weights to Berkshire among any ETF.

Although the Fed has raised interest rates twice this year with another rate hike likely coming before the end of 2017, there are concerns about the central bank’s dovish tone and its impact on ETFs such as RWW. It is expected the Fed will boost borrowing costs one more time before the end of this year and that as many as three rate hikes could be on tap for 2018.