You are at:Home»Featured»Russia ETFs Under Pressure on Increasing Military Presence Along Borders 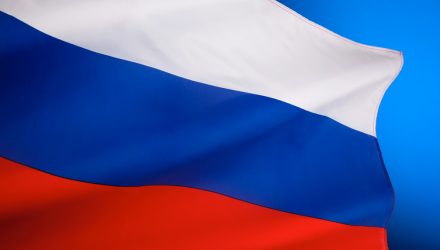 Russia ETFs Under Pressure on Increasing Military Presence Along Borders

The Russian ruble currency depreciated to over an eight month low against the U.S. dollar this week, with both local currency and dollar-denominated sovereign debt selling off, the Wall Street Journal reports.

The extra yield compared to U.S. Treasuries for a Russian government U.S. dollar bond due in 2023 has doubled since November, reflecting the increased perceived risk on Russian assets.

The weakness in Russian assets, though, does not reflect the country’s otherwise strong economic position, with oil prices and a central bank that has hiked rates multiple times to support the domestic currency.

Market observers warned that geopolitics, not economics, are fueling volatility in Russian markets.

Russia has amassed troops along the border with Ukraine in recent months, instigating international concerns of another military move across the border. The U.S. and the European Union have already enacted sanctions against Russia, which would likely be expanded if any military action occurs, according to analysts. For example, the U.S. could curtail Russia’s access to U.S. dollar banking transactions, which would immediately affect Russia’s oil exports.

Furthermore, violent protests in Kazakhstan this week over higher fuel prices added another layer to investors’ concerns. Protesters have tried to storm government buildings, and President Kassym-Jomart Tokayev ordered the police and army to shoot without warning. Meanwhile, Russia stated that it would send troops to Kazakhstan to help the government, further adding to concerns that this could be an excuse to increase its military presence and influence with neighbors.

“Markets are always on the lookout for any more Russian geopolitical involvement in the region, it is something investors exposed to Russia always have in the back of their minds,” Simon Quijano-Evans, chief economist at Gemcorp, told the WSJ. “There may be some spillover there and additional pressure on the ruble.”