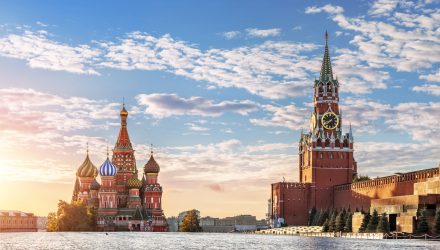 While the rest of the emerging markets were strengthening, Russia stocks and country-specific ETFs were among the worst performers Wednesday as the ruble weakened toward its lowest in over two years in response to more U.S. sanctions.

Pressuring Russian markets, the Trump administration imposed new sanctions on Russia in response to allegations of election-tampering, cyberattacks and other activities, the Wall Street Journal reports.

“Though Russia’s malign activities continue, we believe its adventurism undoubtedly has been checked by the knowledge that we can bring much more economic pain to bear,” Sigal Mandelker, Treasury undersecretary of terrorism and financial intelligence, told the Senate. “We will not hesitate to do so if its conduct does not demonstrably and significantly change.”

The increased sanctions dragged on the ruble currency, which has depreciated 8% against the U.S. dollar so far this month, Reuters reports.