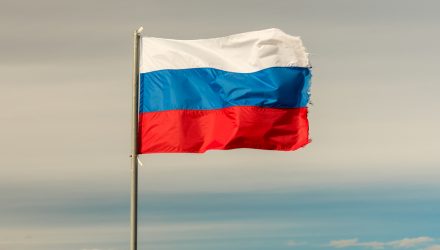 Russia ETFs Are Taking a Beating

Traders who were betting on a rebound in Russian equities received a rude awakening on Thursday as the threat of war was not misguided. ETF investors initially threw millions of dollars into Russia-related ETFs, trying to catch the falling knife before Thursday’s selling.

For instance, RSX attracted almost $58 million in new inflows on Tuesday, the most since June 2018, as Russia faced sanctions from the U.S. and Europe, according to Bloomberg. While Russian markets were closed for a holiday, U.S.-listed ETFs were still trading. RSX was even on pace for its best monthly inflows since December 2020, even while the country’s ruble currency plunged to its weakest level since the start of the COVID-19 pandemic.

However, it should also be noted that the inflows may have reflected a so-called create-to-lend activity where traders create new shares to borrow and sell short.

“It could be part of a long-short trade – long equities and short in FX or credit,” Carlos Asilis, chief investment officer and founder of advisory firm Glovista Investments, told Bloomberg.

RSX’s short interest was about 26% of the float, compared to 10% four months ago, according to S3 Partners data.

“In less than two months of 2022, RSX shorts are up $86mn in 2022 mark-to-market profits, a 23 per cent return on an average short position of $369mn,” Ihor Dusaniwsky, managing director of predictive analytics at S3, told the Financial Times of the data as of Wednesday’s close.

Meanwhile, those who were long also found themselves to be wrong on Thursday, and traders exiting their bad bets on Thursday could have faced even larger losses on widening bid-ask offers amid the volatility.