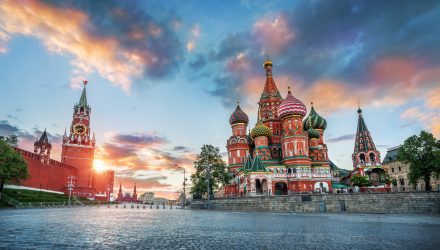 Russia ETF Is Trying to Break Out as Oil Prices Rise

Russia country-specific exchange traded funds have rallied this month and are testing their long-term trend lines as oil prices strengthen.

The VanEck Vectors Russia ETF (NYSEArca: RSX) rose 2.2% Thursday, testing its long-term resistance at the 200-day simple moving average. RSX gained 6.1% over the past month but was still down 0.3% year-to-date.

Brent crude oil futures are now hovering around $81.7 per barrel compared to the $66.6 per barrel price at the start of the year.

Russia Is Not Without Risks

However, the Russian market is not without risks. There are growing concerns that the U.S. could toughen sanctions on Russia in connection with the year’s chemical weapons attack in the U.K. and on the ongoing allegations of election interference or electronic tampering.