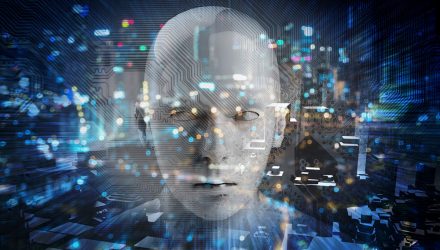 The Global X Robotics & Artificial Intelligence Thematic ETF (NasdaqGM: BOTZ) celebrated its one-year anniversary earlier this month and did so in style. BOTZ is up more than 44% year-to-date, but that is not the only reason to celebrate this ETF.

As has been widely documented, investors are embracing the robotics investment theme, a trend that is benefiting BOTZ in significant fashion. BOTZ tracks the Indxx Global Robotics & Artificial Intelligence Thematic Index.

“According to data from ETF.com, by reaching $450m, BOTZ has become one of just eight ETFs launched since January 1, 2016 to achieve this milestone,” according to a statement issued by New York-based Global X. “BOTZ has seen accelerated growth in recent months, with Global X announcing on June 12, 2017 that BOTZ had reached $100m in assets by the end of May.”

BOTZ provides exposure to companies involved in the adoption and utilization of robotics and artificial intelligence (AI), including those involved with industrial manufacturing, medicine, autonomous vehicles, and other applications.

As of Sept. 18th, BOTZ had nearly $510 million in assets under management, up from about $176 million at the end of the second quarter. The ETF holds 30 stocks.