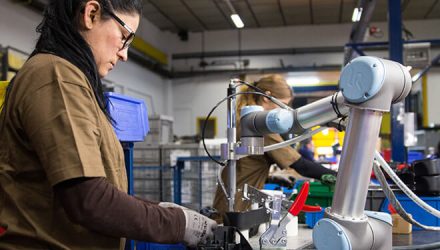 Welcome to the Age of the Cobot

It’s a thrilling time to be working in the world of robotics.

That may seem like a given. After all, every day the headlines are filled with new breakthroughs in robotics, and it seems like we humans are finally ready to jump on board. New research from NPR and Edison Research tells us that as of January 2018, one in six Americans now own a smart speaker, up 128% from just a year ago. Amazon uses robots extensively to accelerate its supply chain and make single-day and same-day delivery a reality for customers around the world. Giant Food Stores is introducing robotic assistants—complete with googly eyes—in every one of its 172 stores, and Walmart is releasing a fleet of robotic janitors to do everything from mopping the floors to collecting data in its stores. And while our cars may not be fully self-driving (yet), robotics, automation, and AI are making our vehicles safer and smarter than ever.

And yet it isn’t these consumer-facing robots that make me excited to go to work every day. What has me energized and eager to see what’s next are the amazing things I get to witness far from the public eye—from my vantage point inside Universal Robots. From here, I can see how businesses large and small are using cobots to change the way the products we rely on every day are designed, manufactured, and delivered.

Unlike traditional industrial robots, cobots are limited in both power and speed, and they are applied to industry-approved safety standards to avoid human injury. Capable of being easily programmed to complete multiple tasks, cobots are designed to assist human beings—not take the place of human workers. In many cases, the cobot takes the form of an arm, providing the worker with an extra set of hands. Cobots protect human workers by reducing the risk of injury from dangerous jobs and repetitive movements, and they improve overall equipment efficiency—all while enabling human workers to get their jobs done faster and more easily than ever before.

It all started a decade ago, in December of 2008, when Universal Robots sold the world’s first commercially successful collaborative robot—or cobot—to Linatex, a Danish supplier of technical plastics and rubber for industrial applications. Cobots were in their infancy at the time, and few people aside from a small handful of robotics engineers and developers had any inkling of the true potential of these small, nimble robots. Linatex recognized that potential and took a leap of faith, installing their shiny new cobot not in a safety cage apart from other workers, but right on the factory floor. Working together, the Linatex cobot and a human workforce instantly took robot-human collaboration to a whole new level. The age of the cobot had arrived.

Ten years later, the market for cobots has exploded. In 2018 alone, the cobot market grew by more than 60%, nearing $500M in global sales. As the fastest growing segment of industrial robotics, global annual revenues of collaborative robots are forecast to reach $7.6B by 2027.[1]

That’s great news for businesses large and small, and yet it has raised the red flag for workers who worry that the wave of robots entering the workforce will bring more harm than good—at least when it comes to employment. By automating and streamlining both skilled and unskilled tasks, many workers see robots and cobots alike as a mechanical workforce that is coming to “take our jobs.”

What’s interesting is that, in reality, demand for manpower is actually outpacing supply. Baby boomers are retiring, and Gen-X, Gen-Y, and Millennials are not interested in manufacturing and warehouse jobs. There simply aren’t enough human workers to get the job done. As a result, even companies who never viewed robotics as a viable solution in the past are suddenly clamoring for help. Cobots are making that help highly accessible and affordable, opening the door for small- and mid-sized enterprises (SMEs) who can now use advanced technology to supplement a team of one, two, or ten workers.

So are robots really poised to take our jobs? Yes. And no.