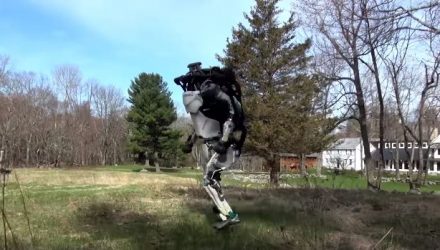 Ready, set, go! The future is becoming clearer and we have humanoid robot, Atlas, created by Boston Dynamic, to thank for it.

In a video shared to YouTube by the robot maker, the uncannily human-like Atlas demonstrates running ability that is just like a persons, including the ability to jump over logs! Against a backdrop of nature, the clanking of Atlas’ motors, gears, and joints are a stark contrast to the peace of the natural world.

According to Live Science, “The robot, described as “the world’s most dynamic humanoid” on the Boston Dynamics website, runs at a slow-but-steady pace over grass, up a slight incline to another field, and then stops in front of a log. Atlas steadies himself, bends his “knees,” raises his “arms” and nimbly hops over the log, landing without a wobble. It’s an impressive display — and so much like the actions of a person that it’s also a little unsettling.”

What does this mean for the future of robotics and AI?