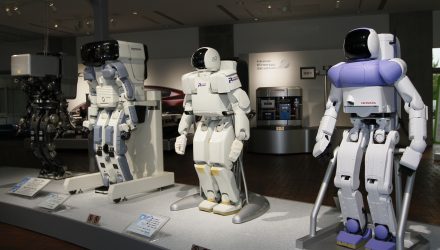 What a different world it was just 5 years ago. At that time, robotics and AI still seemed like something straight out of a summer blockbuster. In most people’s minds, it was pure fantasy. Very few people understood it, and even fewer believed in it as an investable opportunity.

It was then, in October 2013, that our small band of believers started digging into the sector. We were passionate about finding a way to gain exposure into what we already saw as the best investment opportunity of a generation, but there was little opportunity. We knew that picking individual stocks in a nascent industry was far too risky; the pool of players was too young and too innovative for us to grasp which ones would fade away and which ones would prove to be the fuel for the massive growth to come. But not a single robotics and AI-focused mutual fund or ETF existed, and even the most daring VCs were steering clear. It seemed that every investor out there still saw AI as science fiction. Our team believed in the opportunity, but capturing it effectively wasn’t going to be easy.

We decided to move forward on our own, creating a proprietary index of the most promising robotics, automation, and AI—or RAAI—companies around the globe. But once we began, we started to see that RAAI reached much deeper than we had even imagined, touching every point of every supply chain of every industry. It was clear that RAAI was on the cusp of exploding into the mainstream, and that the explosion was going to be huge. What lay before us was a complex ecosystem of technologies and applications that seemed to be coming together like a modern-day Tower of Babel that was going to change the world—fast. And while nearly every technology investor at the time was focused almost solely on Silicon Valley, we were seeing some of the most innovative and promising ideas coming from outside the US.

It was soon obvious that an index that could capture this vast opportunity had to be global, including up-and-comers in Korea, Taiwan, Japan, Germany, the UK—wherever innovation was happening. To identify the right companies around the world, we needed the help of experts—not financial professionals, but the leading authorities in robotics, automation, and AI. We began recruiting advisors, and we were fortunate to attract some of the most experienced researchers on the topic.

The PhDs and industry gurus who came on board quickly schooled us in all things RAAI, pointing us in directions we hadn’t even known existed. We learned not just what companies were making the best robots, but what companies were making the components that were making it possible for robots to think, sense, and act. We were able to see the industry through the eyes of these visionaries to understand how RAAI was being applied in healthcare, food and agriculture, and logistics automation. We learned how it was transforming operations in manufacturing, retail, and energy. We looked at how advancements in sensing, actuation, and computing were feeding a new generation of robots. Most importantly, we saw that the best way to capture the investment potential we were seeking was to build in diversification by creating specific subsectors within the index—subsectors that comprised the entire global ecosystem of robotics and AI.