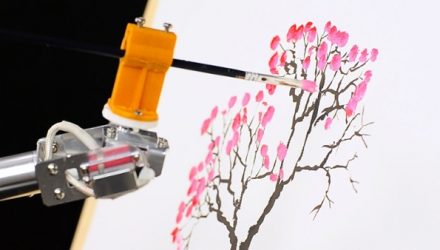 Robotics and Art: A Less Practical More Aesthetic Use for Robots

Are all robots devoid of aesthetic debts? And if not, could we expect the future Guernica to be created by artificial intelligence (AI)? What are the less practical uses for robots, and do they include fine arts?

Could machines ever create art that moves us?

Andrew Conru, the founder of RobotArt with a Stanford PhD in mechanical engineering framed on his wall, is among a handful of believers. Unlike other sci-fi robotic projects, RobotArt is a global challenge for AI and robotics that’s been programmed to express itself artistically. All machines are welcome to participate.

Will RobotArt give rise to a new species of artists with robot programming, or is creation inherently human after all?

Though Spike Jonze’s Her may be a more suitable moving picture to start this conversation with, there’s another movie that brings us much closer to man’s belief in machines as human lookalikes. It was The Imitation Game that first introduced us to the exceptional mind of AI pioneer Alan Turing.

The Turing Test, sadly unexplored in the movie itself, is the world’s most famous tool for determining the uncanny resemblance between human and robotic creation. If the interrogator, the human being, cannot tell whether the creation comes from a person or a machine, the machine has passed the test.

Numerous examples of robotic artworks that have passed the Turing test with flying colors can be found online, the most notable of which are oil on canvas produced by a computer program AARON back in 1992, and For the Bristlecone Snag, a full-length poem that was also generated by a computer, in 2011.