You are at:Home»Robotics & AI»The Right Way to Multitask with a Robot 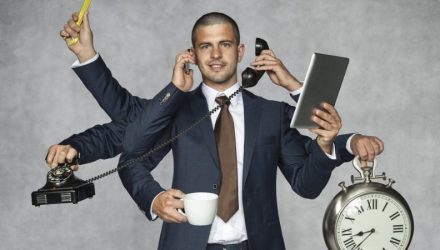 The Right Way to Multitask with a Robot

Can a robot really help you multitask? Well, yes, but not if you listen to the latest research into brain-controlled robots. There’s a much better way to do two tasks at once.

Since I started in robotics over a decade ago, I’ve read a lot of research studies about robots. I’ve noticed that researchers and journalists draw conclusions that I find unrealistic at times.

Take this recent study from researchers in Kyoto, Japan. It ostensibly shows that a brain-controlled robot arm can be used to achieve multitasking. If you work in an industrial environment, you may, like me, be suspicious of this claim. To me, “multitasking” suggests reduced productivity.

In this article, I’ll introduce you to the new research on robotic multitasking. I’ll then explain how you can really use a robot to multitask effectively and improve the productivity of your operations.

I first read about the study in this recent article in the New Scientist. In the experiment, researchers used a brain-machine interface (BMI), which allows your thoughts to control a computer, to operate a robotic arm. Participants used the BMI to make the robot lift and replace a bottle on a table. At the same time, the participants were asked to roll a ball around the table with their hand.

Basically, the experiment was the robotic equivalent of tapping your head with one hand while rubbing your stomach with the other.

As a piece of research on BMIs, the study is certainly interesting. However, I was a bit dubious of the article’s claim that the system “could be used for people who work in factories” to do two tasks at the same time.

If you’ve ever tried to multitask when working on something important, you might agree that it’s not so easy. Instead of allowing you to do two tasks simultaneously, the BMI would surely make both tasks harder!

There’s a much better way to multitask with robots.

In the experiment, participants used the BMI to make the robot lift and replace a bottle on a table. At the same time, the participants had to use one of their hands to roll a ball around the table.

The myth of multitasking—and how robots can help

The problem is that multitasking is a myth. Even if you think you’re good at it, research shows you’re fooling yourself.

According to neuroscience research, trying to do two tasks at once makes you feel more productive. In reality, however, you’re less productive, and the quality of your work reduces for both tasks. If you don’t believe me, try this experiment from Dave Crenshaw, author of The Myth of Multitasking.

The best way to multitask with a robot is to give it some of your tasks. That way, you can focus on the value-added tasks.