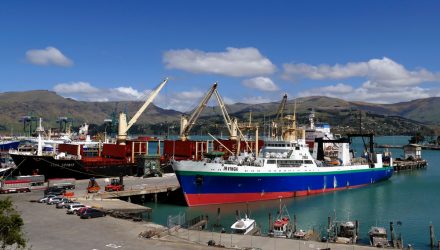 With blockchain technology still in its infancy, companies are vying to become early adopters in order to further their businesses, such as the joint venture between technology titan IBM and transportation company Maersk, which launched a blockchain shipping platform dubbed TradeLens that already boasts 92 clients.

“We have seen a lot of skeptics talk about the validity of blockchain solutions,” said IBM general manager and head of blockchain, Marie Wieck. “And I think with over 90 organizations and over 150 million events captured on the system we really are seeing proof in the pudding in terms of where people are spending their time to get benefits from blockchain.”

The TradeLens platform has already been put to use facilitating global trade without relying on middlemen for a year, which has resulted in $154 million shipping events at ports located around the world. Now, the blockchain platform is growing at a rate of $1 million daily.

The IBM-Maersk effort is joined by Germany-based Hamburg Sud, which Maersk bought last year for $4 billion and U.S.-based Pacific International Lines, as well as a bevy of customs authorities, cargo owners, and freight forwarders. With its beta testing complete, the platform is now accepting early adopter applications and is offering a smart contract service to assist with complex shipping orders with fewer middlemen.

Global market research company Transparency Market Research estimates that a $32.9 billion global supply chain software business is achievable by 2026. In 2015, the World Trade Organization estimated that expediting the global supply chain process could reduce costs among users by as much as 17.5% and a 35% increase in exports for developing nations.